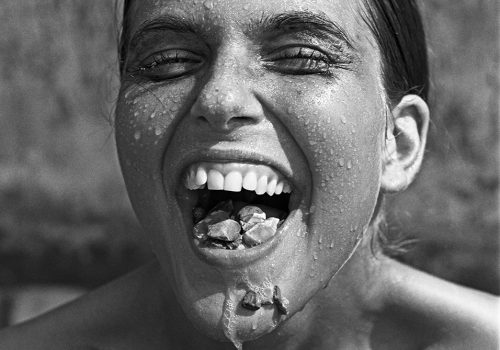 To celebrate the 70th birthday of the artist photographer Karel Fonteyne as well as 50 years of career, Hangar presents a major retrospective of his work through a selection of 200 images.

The exhibition is neither linear nor chronological, but rather circular. The specter of the present will not prevent the visitor from apprehending the work of Karel Fonteyne because his images are timeless and out of time. Like a journey through the photographer’s mind, we jump from photo to photo, from black and white to color, from staging to spontaneous, from conceptual to fashionable photography. The concept of each image directly influences the variety of techniques. At the same time homogeneous and heterogeneous, personal and universal, his work invites us to build our own story.

Spread over the three floors of Hangar, the exhibition is made up of different chapters, where sensuality, esotericism, nature, solitude and humor help to create a particular atmosphere, that of his inner world. Karel Fonteyne’s images awaken the senses and transport you to another universe, they tell a story without words.

Along with the exhibition, a retrospective book titled Spell will be released in September.

Biography / Born in 1950 in Antwerp. Lives and works between Belgium and abroad.

Active since 1968, Karel Fonteyne started out in fine art photography. It is a fascination for the book “Fuglane” by Tarjei Vesaas and for South American authors like Borges, García Márquez, Cortázar but also his interest in the psychology of Bergman’s films which pushed Karel Fonteyne to start photography.

At the end of the 70s, he entered the fashion world and then worked for prestigious magazines such as Vogue, Interview, Bazaar, Marie-Claire etc. He also worked from the start with designers such as Martin Margiela, Dirk Bikkembergs, Dries Van Noten, Marina Yee, Walter Van Beirendonck and Dirk Van Saene.

His work has been exhibited in particular in renowned venues such as the Maison Européenne de la Photographie (MEP, Paris) (FR), Bozar (BE), Arles Festival (FR), Fotoforum Kassel (DE),