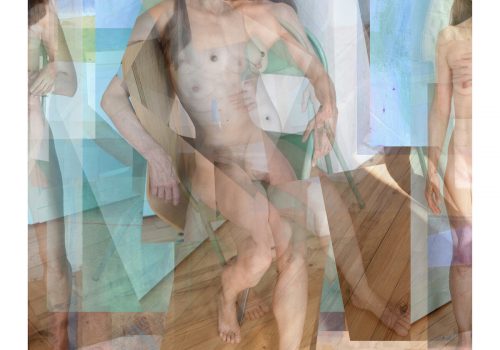 Since 1986, the model Isabelle Mège has been photographed by more than 86 photographers, from Jeanloup Sieff to Willy Ronis, Arno Rafael Minkkinen, Édouard Boubat or Ralph Gibson. These various glances on her body and face, these game between the photographer and the model, are the subject of an ongoing series. The last stone to the edifice is brought by Catherine Balet, at the invitation of the Thierry Bigaignon Gallery.

“I had the idea of making a fragmented portrait of her sitting on an armchair,” says Catherine Balet. “The image expresses ecstasy and anguish, vulnerability and strength; both, a foster mother with multiple breasts and a sensual, abandoned woman.” By multiplying her subject, by exploding her facets, Catherine Balet plays with representations that have frozen the model in a predefined function. The image no longer has a single meaning; collage, superimposition and drawing isolate details, underline roughness. The photographer forces the viewer to an exercise in attention, as long as the artist’s creative process: “I add, I deconstruct, I subtract, I superimpose. I like to work with time.

The result can therefore be a sort of thumbnail sketch, if not an amused recomposition of the looks that, over the years, have been cast on the mannequin. This recomposition underlines that the body is plural, that it is a play of surfaces, roughness, positions, angles. A hundred pictures, as many photographers, will not be enough to exhaust it. Each gesture will lead to redefine what Isabelle Mège could be. When other photographers seek in the model the impossible representation of the “feminine”, Catherine Balet plays with ambivalence: the femininity can’t be perceived as a whole while elements of this femininity are pointed out, isolated and highlighted in the same picture. The model is somehow dissolved by the optical game. By pushing the effort of representation to its paroxysm, the artist refuses —in a way— the challenge posed by the model to previous photographers. Shattered, her body becomes a multiple, a waste almost impossible to decipher, to admire, to fantasize. With this recomposition by Catherine Balet, Isabelle Mège’s series takes a new turn. The blank check given to the next photographer will prove to be particularly complex to write.

Graduate of the Ecole des Beaux-Arts de Paris, Catherine Balet began her artistic career as a painter before moving to photography in the early 2000s. Her photographic work then took on a sociological dimension. Her series of portraits of teenagers “Identity” and her series “Strangers in the Light” anchored her work in a contemporary reality. From 2013 to 2016, Catherine Balet worked on her series “Looking for the Masters in Ricardo’s Golden Shoes” in which she paid a vibrant tribute to the masters of photography. From Nadar to contemporary trends, through Man Ray and Martin Parr, she has captured the history of photography, and looked for ways to reflect on its future. With her series “Moods in a Room”, Catherine Balet continues her experimentation by reinvesting the technical transformations of the photographic medium and wonders about the border that separates painting from photography.

At the age of 20, Isabelle Mège discovered the work of Jeanloup Sieff at the Musée d’art moderne and conceived what was to become an extraordinary artistic project. Over the years, she selected and contacted a large number of photographers, some famous, others less known, and offered to pose for them, preferably naked, in exchange for photographs. Jeanloup Sieff was the first, followed by Willy Ronis, Christian Courrèges, Jan Saudek, Joel Peter Witkin, Arno Rafael Minkkinen, Édouard Boubat, or Ralph Gibson and Henri Foucault. With this unorthodox project, the model imposes herself on the photographers, chooses them and challenges them to put their creativity at the heart of a process of which she is the driving force. She becomes “THE” female subject, both unique and multiple. This multitude absorbs the character and makes her disappear as a person.Catherine Balet’s work has now been added to this important collection of photographs, representing more than 140 images to date.