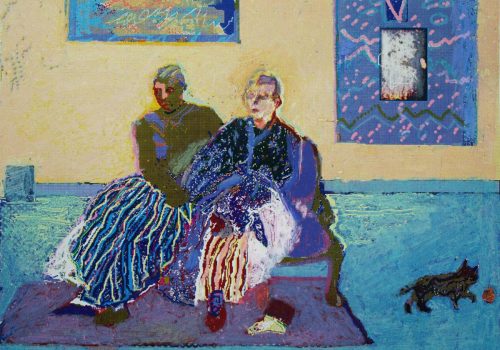 Galerie Thierry Bigaignon is now offering on its website (www.thierrybigaignon.com) a Viewing Room, or shall we say several Viewing Rooms. Thierry Bigaignon comments: “Our Viewing Room is a great way to discover and acquire rare, unique, exclusive artworks from the artists we love, as well as being able to preview a selection of works which will be exhibited later on at the gallery. We are opening new viewing rooms on a regular basis and we offer Worldwide shipping”.

The latest Viewing Room just got published and features a selection of remarkable early works by the artists of the gallery, unearthed from their studio. From 1946 to the 2010s, these works represent very well in each case the artists’ debut and prefigure their interest and style very early on. A unique opportunity to acquire artworks which will be soon very much sought after.

Here is an excerpt:

In 1989, with the first drawing software being released, Catherine Balet saw an opportunity to start working with a mouse just like she used to work with her brushes. This unique artwork, produced with this new technique, showcases an interior scene dear to Catherine’s practice. To reinforce the work and to counter-balance its digital nature, she then used oil pastels to draw on the print itself, bringing to her digital work an interesting texture. This artwork was only printed once in 1989, and since it was saved on a floppy disk which got lost, it could never be reproduced. As unique as it gets!

Renato D’Agostin, Tour Eiffel, 2002
In 2002, Renato D’Agostin started an epic journey as he left Italy to travel throughout Europe and decided to dedicate his whole life to Photography. He was only 19! This photograph, very dear to his heart, never got published but remains one of his favorites. The grain is already there and so is the contrast. Renato D’Agostin was born. The rest is history!

Henri Foucault, Tête n°4, 2000
This photograph is part of a series of 22 images which is of an upmost importance to Henri Foucault. When he stumbled upon these moulages, made in the 19th century, Henri felt the urge to photograph them as he was utterly impressed by the humanity of these sculptures. Who would not! He did not know then that these same moulages had been photographed in 1847 and shown in 2003 at the Musée d’Orsay in a Daguerrotype-focused exhibition curated by Quentin Bajac. Whereas the intention of the photographers back then was purely scientific, Henri’s main focus was to portray that humanity. These images have played an important role in the artist’s work from then on, as they triggered his interest in figurative photography, as well as a need to work with living models. This photograph has been acquired by several high-end collectors, among who Francois Pinault. It can now be yours too!

Vittoria Gerardi, Pompeii, 2016
Back in 2016, in the development of the Pompeii project, Vittoria Gerardi went through a stage of experimentation with photographic collages. The collages are produced through a process of recomposing gelatin silver fragments cut from contemporary photographs she took in Pompeii, pursuing a surreal visual experience of the ruin. In this image, the columns of the Forum are repeated multiple times and composed in a cyclical movement towards the sky and down back to the earth to signify the undistinguishable relation between real and unreal. Later on, this was explored through the use of plaster on the photographic print, deepening the process of revelation rather than that of de-construction, leaving aside the exploration done with the collages. All of the 7 collages produced are part of the personal archive of the artist and therefore not for sale. Vittoria made an exception with this artwork just for you. Jump on the opportunity!

Rémi Noël, Twisted Tulip, St Cloud, 1995
French photographer Rémi Noël, who recently joined the gallery, is a poet, a poet who uses images as his main language. His photographs, carrying a deep sense of freedom – that same freedom sought after by most travellers -, brilliantly mingles imagination with reality, with a touch of humour. Before embarking on his American road trips, Rémi Noël started working in his kitchen and made several still life photographs. This image was published in his very first book, Natures mortes mais pas trop, and like with all other images of the book Rémi managed to inject life and humour in his still life photographs. Don’t ask how the stem embraced the shape of the vase, it is a trade secret!