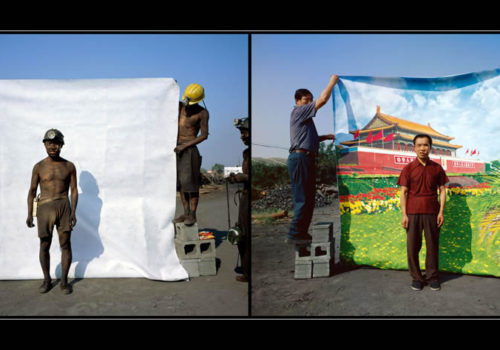 It’s hard not to think of Richard Avedon when looking at Li Hu’s Coal Miner and Happiness work. He captures the hard working, soot-covered individuals immersing themselves in a profession with many safety risks. It’s an all too familiar story of individuals, many who need to provide for their families and are working in this industry because it’s the only thing they know or the only opportunity they have. However, the topic of coal miners specific to China’s development as well as the deliberate usage of changing backdrops individualizes Li Hu’s work.

How did the Coal Miners & Happiness begin?

When I was learning photography, it was very important to learn from the basics. And I started taking pictures of flowers, landscapes and other kinds of subject matter. In 2000, I went to Deng Fen, Henan Province to take some scenic shots. The weather that day wasn’t good for scenic shooting, so I decided to explore the coal mining industry since the area was known for it. With the help of a local villager, I met some coal miners. It was a bit of a shock as they looked like black statues, covered in soot from head to toe. Meeting them and understanding the devotion they had for their job was quite moving, and the project ensued from there.

The work created from 2000-2007 was shared with Jiang Jian (a well respected Chinese photographer and critic) and other photographers in Henan who responded with praise and support.

There were other Chinese photographers that covered the same topic of coal miners, and I realized that it was very important to find my own voice apart from other photographers. I was compelled to create more work using different styles of expression.

Can you describe the process with creating this body of work?

Coal Miners was shot more in a documentary way with varied compositions where the images were black and white. Happiness focused on a portrait series, which compared and contrasted individuals using different backdrops.

I went to the county where the coal miners lived and asked them to pose for their portraits. All of them said they were too dirty which would not make for an attractive portrait. They asked if they could shower and wear clean clothes for their picture. I said, “This look is part of your life, and it’s important to capture this.” But they insisted on cleaning themselves up. They said if there were some flowers or something beautiful in the background, it would be a better picture. I knew their dreams included having their picture taken in front of Tiananmen, a very meaningful symbol for China. So I used a backdrop of Tiananmen for their cleaned up look, and I used a white background to shoot them not showered to bring out some of the their characteristics in their work environment.

Can you describe a memorable photo in Coal Miners?

In the portrait titled, “Dengfeng City”, there is a photo of a worker sitting on the steps. This guy impressed me because the details of his clothes reminded me of the hardest time in my childhood where villagers wore old clothes with holes in them. The holes and rips were constantly being patched. You could feel how hard this coal miner worked, his hard life. And despite all of this, he is appropriately proud, stoic, and heroic.

There was also a sense of hopelessness with many of the workers. They aren’t as educated and have to do hard manual labor in a dangerous environment with low wages. Not all of the workers are protected, and they aren’t always given the proper clothing and accessories to wear. And yet not everyone is strong enough to be a coal miner. His expression in this photo also captures this reality.

And what about in Happiness?

There is a portrait of a small man who has some mental retardation. He’s a very simple guy, uneducated, who works hard to make money. I admire his work ethic, his ability to give 100% of his energy to a task, where he was able to feel a sense of self worth. Workers like him are remarkable because they live such humble, hard working lives. They work much harder and receive much less monetarily than your average individual. And yet they are able to find a sense of happiness and peace among themselves. These people are considered the lowest class in society but are the base support to our society. Their work allows others to live comfortable lives, and coal miners deserve so much more credit.

Why did you title this portrait series Happiness?