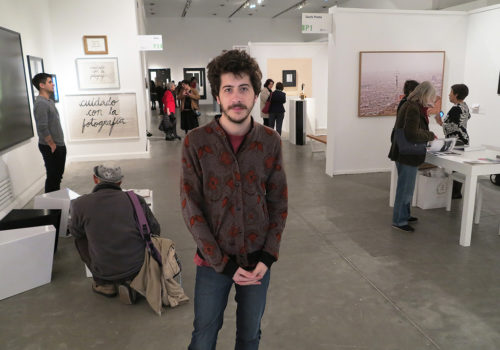 Francisco Medail is precocious. As a child he was already playing with pocket cameras and rolls of film that he found at home.  Adolescent, he started to make his first images. At 24, he became the artistic director of the largest photographic fair in Latin America,  BA PHOTO. He brings us his career, his approach to photography and his vision for the fair.

“This year”, Francisco said to us, “we wanted to give a greater coherence in reuniting the different generations, in an integrated approach valuing as much daguerreotypes and gelatine silver prints as the most contemporary of media such as video.”

“We have also added to the quality requirements of the galleries, given more power to the guest artist – the Peruvian Luz Maria Bedoya – and increased the standing of Argentinian photographic history by dedicating a space to George Friedman, whose work I like very much and has been a little forgotten.”

Francisco Medail insists on the consistency and the variety of BA PHOTO: “Besides the twenty galleries which show a large range of quality contemporary artists, we also have a Wunderkammer (a room of wonders) a sort of nineteenth century curiosity room when you can discovery photography from a historical point of view. We have also strengthened the space dedicated to books.

The section Fuera De Foco (Out Of Focus) continues with its approach aiming at enhancing the status of young artists, the art of the future.

Francisco Medail, they say, is a curator, an artistic director, but he is also a tireless and prolific artist photographer. A photographer without a camera…

For some years, in fact, he has produced several series based on the appropriation of photographic material found on the internet.  He works with images pulled from Google and Twitter, to which no one pays any great attention, and he restores them to their artistic dimensions, by way of questioning.

Note that in November, Francisco Medail will be at Paris Photo with another series Parte where he retrieves  “peripheral images”. He uses the photos by drug traffickers’ sons, which they put on the net, mostly on Twitter, photos of their lives, of their intimacy. “At the beginning, they are photos where there is a lot of violence, which I modify, I edit, “in the expectation of something more subtle.”

He photographs the images and makes gelatine silver prints of them, in this way passing from the digital to the analogue. Once more the desire is not to separate the contemporary from its past.

From the point of view of content, in completely making up a “reportage’, Francisco Medail questions the role of photojournalism. Can you produce a reportage on “drug traffickers” without leaving home using only the photos of the “actors”?