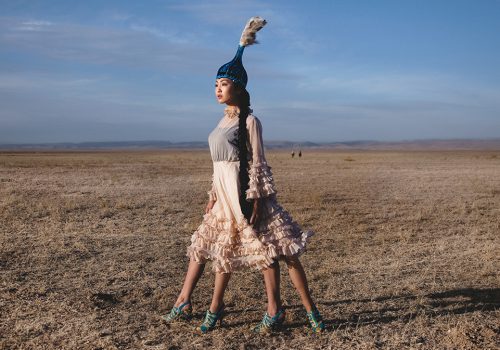 Aspan Gallery, Almaty, Kazakhstan, presents its first project in the UK – a duo exhibition by two of Central Asia’s most prominent contemporary artists, Almagul Menlibayeva and Yerbossyn Meldibekov. The exhibition is part of the inaugural programme at Cromwell Place, a first-of-its-kind hub for the arts in the heart of South Kensington.

The exhibition titles come from a phrase by an important Soviet avant-garde artist Sergey Kalmykov (1891-1967): “It’s difficult to be a point – it’s easy to be a line, as everything in our world is moving”. Kalmykov moved in the 1930s from Moscow to Almaty, where he was able to paint his imaginary parallel universes with fantastical creatures, far removed from the Socialist Realist constraints imposed by the Soviet State. Kalmykov was an important historical figure, and whilst under­recognized, the fact of his existence itself had a tremendous impact on the development of the contemporary art scene in Central Asia.

Menlibayeva explores the painful histories of Central Asia in her video and photography work. In her seminal video Exodus (2009) female spirits dressed in black are seen thrashing their hair against the backgrounds of concrete ruins of former concentration camps, mixed with the images of a large number people packing up their yurts and leaving, reminding not only the myth of Moses leading his people out of Egypt, but also the current migration crisis.

In her work, Menlibayeva often draws parallels between lines and forms she finds in the steppe with the female body, comparing low round tables used in the yurts to breasts, or scarce steppe vegetation to the body – in parts smooth, in parts hairy. For Menlibayeva, fluidity is one of the main characteristics of her work and female identity.

“Working with the mediums of video and photography made me an observer of endless realities, it transformed my relationship with the surroundings. Textile, felt and threads taught me fluidity. They are complicated architectural materials, that can connect distances and create spaces, become a black hole, bend spaces without corners, and spread out like a huge projection.” Almagul Menlibayeva

For Meldibekov, the existence of Kalmykov is one of many events, like the re­naming of a single mountain three times in the course of a century, depicted in the Lenin Peak installation (2007-2014), or 10 monuments replacing each other on a 300m2 square in Tashkent, documented in Transformer (2013) and Contest (2010), which could have happened only in Central Asia. Time flows differently in Central Asia, according to the artist, and that’s why all kinds of strange events happen there. In his artistic practice he explores these occurrences through video, photography, installation and performance.

“During the struggle between the colonies of Britain, Russia and China in Central Asia, there was one city that had a strategic importance. Transport nodes of Central Asia, the blood circulation of the whole body took place, were connected at one point in the city centre. This point is 300 m2 in size. From this place constantly emanated impulses, similar to the heartbeat, and sometimes magnetic storms. They gave out all the biological movements of a large monstrous organism.” Yerbossyn Meldibekov