As solid as rock: eight artists of historical reference at the 2019 Bamako Encounters 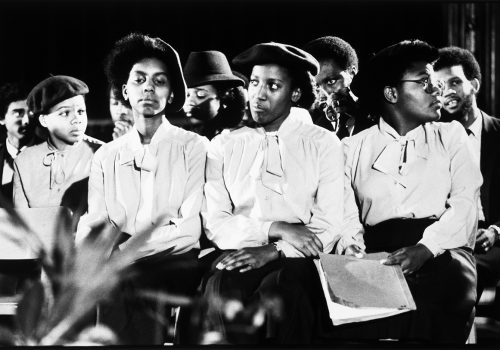 They are designated by an appellation from which can be perceived all the indisputable force of their work acquired through the experience of a lifetime. Solid, they are because unbreakable. Nothing can tarnish a reputation acquired over the years and verified by the successes which crown their respective careers. Felicia Abban, Akinbode Akinbiyi, Jihan El Tahri, Armet Francis, Liz Johnson Artur, Eustaquio Neves, Youssouf Sogodogo and Deborah Willis, will therefore be called “Solid Rocks” as part of the 12th edition of the Bamako Encounters.

This is another novelty of this edition of the African biennial of photography which celebrates its 25th anniversary this year. Many people ask who is or who are the artists who, like in each edition, is or are the subject of an exhibition known as “tribute to an artist”. Tribute will be paid to the qualitative scope of their work and the immensity of their careers, but in a different way. Rather than dedicating an exhibition space to an artist, Dr. Bonaventure Soh Bejeng Ndikung and his team of co-curators Aziza Harmel, Astrid Sokona Lepoultier and Kwasi Ohene-Ayeh, have chosen to design a global curatorial project in which the works of these eight renowned artists dialogue together alongside those of other confirmed artists, emerging artists and young emerging artists, but also collectives and special projects. The biennial is in fact designed to reflect and present a vision of the realities of the African world by connecting the multiple voices that inhabit it.

The “Solid Rocks” in a few words:

Felicia Abban is a pioneer of Ghanaian photography whose career began at the age of 14 when she became an apprentice photographer to her father. With her four-year training, she left Sekondi-Takoradi where she grew up to settle in Accra as a young 18 years old bride. In addition to having established her own photo studio there in the 1960s and 1970s, she was the first female official photographer to Ghana’s first president, Kwame Nkrumah. Known for her portraits and especially her self-portraits taken before the parties and official events she was to go to, she also captured the hope aroused by the country’s independence from the former British colony.

(to see at the National Museum of Mali)

Akinbode Akinbiyi was born in Oxford, England, to Nigerian parents, and grew up in England and Nigeria. A keen eye for surveying local and foreign territories, he captures with his Rolleiflex – twin-lens reflex camera, the invisible of everyday life at the pace of slow steps through urban and rural spaces and at the whim of his travels around the world.

Jihan El Tahri is an award-winning Egyptian-French director, screenwriter, visual artist and producer who began her career as a journalist specialized in Middle Eastern politics. The works that she presents at the African biennial of photography answers her questioning on the future of dreams and visions activated by independences, and this through the use of the archive.

Armet Francis is a Jamaican-born photographer and publisher based in London. He began his career as a photographer in the fields of fashion and advertising. In the midst of struggles for civil rights, his photographic practice refocused on black identity in Great Britain in the 1960s. He then documented the daily life of the African and Caribbean diasporas, in particular with two life projects: The Black Triangle: People of the African Diaspora and Children of the Black Triangle.

(to see at the Modibo Keïta Memorial)

Liz Johnson Artur is a Ghanaian-Russian artist, photojournalist and editorial photographer born in Bulgaria in 1964, raised in East and then West Germany and now living in London. Since 1985, she has put the human question at the center of a multifaceted work, with a practice that includes photography, cinema and installation. For more than 30 years, she has captured portraits of women and men from African diasporic communities through her encounters in social contexts that highlight their vitality and creative expression.

Eustaquio Neves is a self-taught visual artist born and living in Brazil. For thirty years, he has invested himself in the search for alternative and multidisciplinary techniques, manipulating negatives and copies in photography, or exploring electronic media, such as sequence and movement. His work focuses, among other things, on issues of identity and memory of cultures of African descent.

Youssouf Sogodogo was born in Sikasso, Mali, in 1955. In 1999, he won the prize of the Ministry of Culture of Mali at the Bamako Encounters. In addition to his personal work as a photographer, he is a man engaged in cultural and artistic action, having been not only responsible for the Sahel Museum in Gao in the 1980s, but as Head of Conservation at the National Museum of Mali for 16 years. He is also the founder and director of the Bamako laboratory and training school CFP. Youssouf Sogodogo’s photographic practice is characterized by black and white, of which only a tiny part on the inventory of braided hairstyles in Mali will be presented at the Bamako Encounters by Black Shade Projects.

(to see under the Babemba interchange)

Deborah Willis is a photographer, university professor and director of the department of photography and imagery at the Tisch School of the Arts at New York University, where she teaches photography, iconicity and cultural history in wondering about the black body, women and gender. Her photographic work explores how African-Americans build their identity and image today, as well as their relationship with representation and beauty.

(to see at the Medina Gallery)