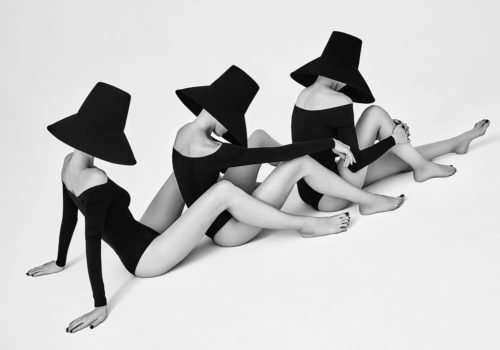 As part of the ‘Fashion and Style in Photography 2021’ biennale, the Multimedia Art Museum, Moscow presents the project ‘Not for Everyone’ by stylist Vadim Galaganov and photographer Damir Zhukenov.

Vadim Galaganov worked for many years as fashion editor and fashion director for leading glossy magazines, before focusing on his own creative projects from 2020. During the epidemic and quarantine he became absorbed in watching vintage Hollywood movies. For a person with extensive experience at the Condé Nast publishing house who is well-versed in the history of world fashion photography, who was brought up on the works of such classics as Peter Lindbergh, Mario Testino, Richard Avedon and Tim Walker, this immersion in the history of cinema turned into an intense analytical study, an examination of how the concept of beauty has transformed over the past century. Not far from Vadim Galaganov’s home there was a photo studio left empty during quarantine. By inviting the photographer Damir Zhukenov to collaborate, Vadim Galaganov tried to make a reality of three imagined novellas on the theme of beauty.

For the ‘Codes’ series Vadim Galaganov developed the design of hats, which turned into art objects that accentuate the beauty of the models’ faces and bodies. Contrasted black-and-white shots, dramatic lighting and the models’ poses refer to the images of great fashion photographers.

The title of the series ‘Does’ is borrowed from the eccentric and, for the 1920s, daring production by Bronislava Nijinska to music by Francis Poulenc. Diaghilev’s enterprise combining fragments of oriental, Slavic and experimental culture made Russian ballet famous all over the world and became a harbinger of dance as a practice for emancipation and self-discovery. The slender, flexible and ephemeral heroines of the series, engulfed in folds of flying tulle, personify the freedom of self-expression that is born in dance.

The ‘Post-Atom Age’ series is dedicated to British designer and photographer John Sutcliffe. His work was inspired by Vivienne Westwood, Paco Rabanne, Alexander McQueen and Thierry Mugler, and film heroines dressed in latex (from Tim Burton’s Catwoman to Trinity from ‘The Matrix’) have become associated with strength and independence. The ‘Post-Atom Age’ series is the story of a modern woman who openly demonstrates her sexuality, who realises and fearlessly accepts her own individuality.

Vadim Galaganov, born in Baku, moved to Moscow in 1986 and began working in fashion and style magazines in the early 2000s. For 14 years he was fashion editor for the magazine ‘GQ’, then he became fashion director at ‘ELLE’ for 4 years. He launched the magazine ‘ELLE Man’ as editor-in-chief. In his 18-year career as stylist and fashion director he has worked with the editors of ‘Vogue’, ‘Glamour’, ‘Tatler’, ‘AD’ and ‘L’Officiel’, as well as with top celebrities.

Damir Zhukenov was born in Petropavlovsk (Kazakhstan) and moved to Moscow in 2015. He became famous thanks to his shoots with Russian stars like Darya Moroz, Diana Arbenina, Yuliya Snigir, Maxim Matveev, Viktoriya Tolstoganova, and others. Collaborates with the magazines ‘ELLE’, ‘L’Officiel’, ‘Tatler’, ‘Esquire’, ‘Cosmopolitan’, ‘HELLO’, ‘OK!’, etc.