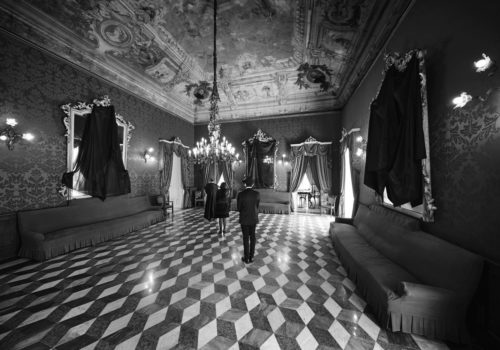 “An apparent realism leads us through the ancient rituality of unchanging gestures, where something undefinable (…) makes things and objects stonelike: Death has entered the scene. The ensemble is made more alluring by the photographs’ black and white”, the well-known Italian writer, Dacia Maraini, wrote in the preface of the book Death in Sicily, by Armando Rotoletti. And the book yielded an exhibition of the same title, that’s now on show at the Church of San Vincenzo Ferreri in Ragusa Ibla, in the heart of the Sicilian Baroque.

An ideal venue for these pictures as their sequence becomes history of “an ‘immaterial’ heritage, an expression of historical memory that needs to be exalted, rather than removed”, the photographer says, adding “To understand Sicily and the Sicilians you need to think about its history of domination. Its culture is steeped in Greek tragedy and Spanish theatricality, in religious celebrations and pagan rites, whose aftermath can still be seen. Here everything is dilated and exasperated, visceral, passionate: feast, food, life, death”.

Rotoletti has been working on the tradition of mourning and grief for almost three years (in pre-pandemic times), trying to collect the remaining traces of it in Sicily and fixing them in pictures that are social and ethnographic documents, dealing with a context that is destined to fade away.

These images are a sign of an iconology that has played out, unchanged, for centuries. And as in medieval novels, the photographs, although shot in different moments and social environments, are placed in a narrative frame connecting them according to the interpretation given, firstly, by the author. But they can be read in other ways, too, according to the different points of view of the observers: focusing, for instance, on intrinsically baroque visions or, instead, on the “objectivity” of photo-reportage, or the attention to the ‘historical’ representation of death.

Like in the cover image of the book, with the Circolo di Conversazione of Ragusa Ibla and its party room listed in mourning (the mirrors covered by black drapes are noteworthy), recalling scenes from The Leopard (the historical novel by Giuseppe Tomasi di Lampedusa made into a film directed by Luchino Visconti) or in the wake, that is reminiscent of Caravaggesque tones. But also in the representation of more “ordinary” mourning rites. Moreover, “just as many things in life, death in Sicily is lived more passionately and viscerally than elsewhere” out of death comes new life: “there’s a sense of triumph over death”, like in the rite of Aurora on Easter, that is focused in the meeting of the Mother and the risen Son.

A complexity of factors that Armando Rotoletti summarizes in a consideration. “I realised that photography itself is death, the crystallized instant of a thing, a gesture, an intention that will never be again. But it is also eternal life, memory, because it delivers to the future an image that can no longer be lost. Only after many years was I able to understand that photography, subconsciously, gave me the sensation of stealing away from the fleetingness of the people and things I was capturing, in an extreme attempt to eternalize them”.

As Ignazio E. Buttitta, university professor and scholar of ethnology and folklore, recalls in the foreword of Death in Sicily (EBS), “Remembering, like hoping, relieves the burden of the present and sweetens its bitterness. (…). The first of November, All Saints’ Day and eve of (…) the Day of the Dead, was for us children a day of impatient waiting. For it was the death of the day that would usher us into the festivities. My father Antonino (used to) (…) cry out: ‘Come on, let’s go to the Fair!’ It wasn’t the assurance of the presents he would buy us (…) that got us shivering”.

Children were well aware that gifts from the dead were coming: toys and sugar puppets. “Rather, it was the desire to fill ourselves with colours, sounds, smells and extraordinary flavours; to travel with our father to another dimension, the mythical one of ageless time”.