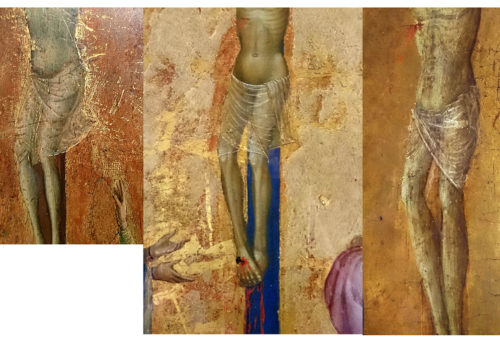 This exhibition, whose title “the blind spot” refers to the Mariotte blind spot (the only place of the retina that does not see), is the culmination of the unprecedented research carried out by the photographer and visual artist Jacqueline Salmon on an object central and yet very absent from research in Art History: the perizonium.

Attached to the figure of Christ, this loincloth is both a veil of modesty, a representational issue for artists and a precious relic for the Church. But by retracing the different ways in which it has been drawn, painted or sculpted over the centuries, it also proves to be a formidable indicator of the artistic and religious mentalities of Western societies in the face of the representation of the Christic body, both human and divine. . From Gothic Germany to Renaissance Italy going from Flanders to Spain of the Golden Age, the imagery of the perizonium has been codified by theology, but it has also sometimes been influenced by civilian fashions. – like the subligaculum, a typical undergarment of Roman Antiquity – or was invented from scratch by artists, who provided endless ways to drape it. Some painters thus invented designs that were largely copied, such as Giotto, who introduced transparency, or Rogier van der Weyden, whose perizoniums stand out from Christ to become flying drapes. Some, like Michelangelo, will go so far as to suppress it. As for the artists of the 20th century, they oscillate between taking up designs from the past and personalizing the subject to the extreme, like Chagall, who diverted the Jewish prayer veil to cover the hips of Christ, or Picasso, who replaced the loincloth with the cape of a bullfighter.

Despite the major questions it raises, the perizonium still constitutes a “blind spot” in iconographic research, almost a non-subject, there are less comments about it than on the other elements of the scenes of the Passion: the position of the body of Christ, its stigmata, the characters surrounding it, the variety of their expressions, the way in which the blood flows, etc.

By empirically constituting and using her camera, a vertiginous set of photographs on the perizonium (shots she made in situ in museums, galleries or in the archives of antique dealers), which she completed By collecting numerous reproductions of works in books and on the Internet, Jacqueline Salmon travels through the History of Art from the 11th to the 20th century and offers what stands out as the most advanced iconographic research ever carried out on the perizonium.

Above all, she establishes the photographer’s gaze as the cornerstone of research and makes framing and composition a tool of dissection that she places at the heart of photographic practice. Finally, it renews the exercise of photography of works of art, which is not considered here as a reproduction tool, but as a medium of interpretation in its own right.

Initially scheduled for 2020, the “Le point blind” exhibition has benefited from two additional years which have enabled Jacqueline Salmon to further enrich the already rich corpus of her perizoniums. Today, the selection of works for the exhibition has around 230 prints.

The first part of the exhibition is a series of 14 photographs – fortuitous echo, but not devoid of meaning, of the 14 stations of the Passion of Christ – which come to insinuate themselves into the permanent collections, to maintain temporal, stylistic, or simply aesthetic with the paintings of Jacques Réattu, the sculptures of Germaine Richier and Ossip Zadkine, the drawings of Pablo Picasso and Pierre Buraglio.

The second part is devoted to the heart of the research. Organized by periods and ways of draping, the tour begins with the oldest representations of perizoniums, still very much influenced by the Byzantine icon, to end with the reinvention of the subjects of the Passion by 20th century painters (Bacon, Sutherland , Rouault, Chagall). It is punctuated by the artist’s photographs, presented in isolation or in the form of clouds of images, as well as his precious study notebooks, which constitute the matrix of the exhibition and the accompanying book.

Biography of the artist

Born in 1943 in Lyon, Jacqueline Salmon lives and works between Paris and Beaujolais. She has devoted herself to photography since 1981, developing a work whose main subject is the study of the relationship between philosophy, history of art and history of places, through the prism of photography. In 1993, she won the Villa Medici prize outside the walls for her project Entre center et absence.

She has produced numerous books in collaboration with philosophers and writers such as Hubert Damisch, Jean-Louis Schefer, Christine Buci-Glucksmann, Michel Poivert or Jean-Christophe Bailly. She has curated exhibitions and was, with Françoise Morin, artistic director of the Urbi & Orbi biennial in Sedan, on the theme of photography and the city.

Interested in pedagogy, she has also taught at the University of Paris VIII and in the schools of architecture of Saint-Étienne and Lyon, where she is regularly invited for workshops and seminars.

Jacqueline Salmon. Le point aveugle
Co-published with the Réattu museum, SilvanaEditoriale publishes on the occasion of the exhibition a book reporting, like an atlas containing 963 illustrations organized in the form of montages by type of drapery, the research carried out by Jacqueline Salmon on the perizonium.

Preface by Patrick de Carolis, Mayor of Arles; foreword by Andy Neyrotti, curator of the exhibition, and Daniel Rouvier, chief curator and director of the Réattu museum; introductory text by Sébastien Allard, chief curator and director of the Department of Paintings at the Louvre Museum; essays by Jean-Christian Fleury, art critic specializing in photography, and Guy le Gaufey, psychoanalyst.