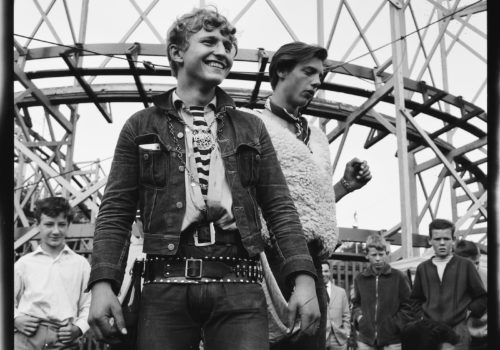 Karlheinz Weinberger was an unknown Swiss photographer until his photographs were widely discovered in 2011. This posthumous exhibition dedicated to his work, gives homage to an Helvetian generation in search of their identity.

In the 50s, Swiss-born Karlheinz Weinberger encounters a young rocker on the streets of Zurich who posed for a portrait. It was then that this photographer for gay magazines worked his way into the flourishing culture of Swiss gangs. These adolescents, under American influence, were playing tough guys on big bikes, displaying the name of their bands, rolling around on the ground and kissing in the woods. They would wear horseshoe symbols, helmets of the Wehrmacht as a sign of their rejection of authority and replaced the zippers of their jeans with chains, screws or belt buckles with Elvis’ head. Fascinated by this, Weinberger views them with respect and immortalizes their daily life in a work that is both raw and personal, while bringing these rebellious blond heads one by one into his universe: an industrial warehouse in which he works for a large portion of his life, photographing during his free time and his off-hours.

The images of these “Halbstarke”, literally “half strong” were published in 2011 by Rizzoli in a monograph, Rebel Youth, and are now the object of an exhibitions in Arles. A work that is rightly sexy, shocking and totally iconic: it is more than just a series of Elvis fans in an absolute rock & roll crisis – behind these images there is a contemplation on the difference. The difference that this youth adopted in harnessing metallic knick-knacks in a marked effort of marginalization in regards to the Swiss upper-class, immaculately dressed. A movement rejecting the social ideal norms imposed upon them that Karlheinz Weinberger knew how to capture, as other distinguished names in photography.

If, during the last fifteen years, the collectors, fashion and film directors have become increasingly interested in these fiery angel faces, their photographs in such a raw realism still remain little known to the grand public. And the man, who subsequently became interested in the Swiss Hell’s Angels between the 1950s and the 1980s, having photographed the youth of Europe for 50 years, remains to be discovered. John Waters, author of the foreword to Rebel Youth, knows a thing or two about him: “Karlheinz Weinberger is Swiss??! You’re kidding me.” The henceforth proclaimed artist, most of the time without work, had been just a number at the unemployment office, an intermittent esthete and an inspired amateur, passionately obsessive. We only know of him his past at Siemens working in the inventory department.

According to Guy Trebay, a columnist at The New York Times, Weinberger’s work was copied, for example when his exhibition catalog Karlheinz Weinberger: Photos 1954-1995, was published in 2000, in particular by the photographer Steven Meisel and the fashion designer Martin Margiela. Nevertheless, we know that photography was for Weinberger, who passed away in 2006, a way to access different worlds that he observed and that seemed to him initially inaccessible. In consequence, he was often an intimate stranger, and, like numerous portrait photographers, in search of his own effigy or even of several lives.