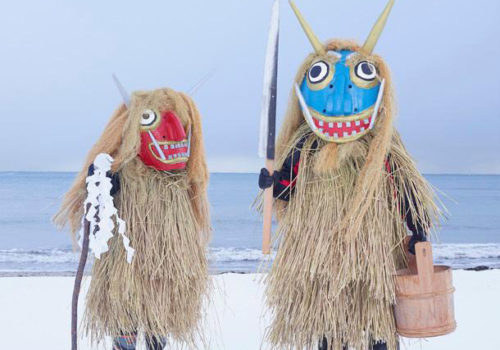 As a part of the official program of the Rencontres d’Arles, the new photographic series of Charles Fréger, entitled Yokainoshima, is on display at the Église des Trinitaires. The French photographer has been supported by the Hermès Foundation. He met  us to talk  about his new series exhibited in Arles until August 28th. The series is also  published by Actes Sud.

Following Empire, Wilder Mann, and Bretonnes, you continue to inventory human communities. Why and how did you choose Japan?

After Wilder Mann, which focuses on winter masquerades, I began researching traditions that bore  similarities to those I had photographed in Europe. I had heard about masked ritual figures in Japan,  when I went there in order to exhibit  at the Hermès Foundation  space in Tokyo, called Le Forum, the lady curator , Reiko Satsuma, offered to help me with my research in Japan.

Where does the title of your book, Yôkaïnoshima, Island of Monsters, come from?

In Japanese, Yokaï does not mean “monster” in the strict sense of the word. It refers generally to the imaginary creatures which populate Japanese culture. They may be ghosts as well as demons, or even objects. They include characters one finds in the early mangas by Hokusai, for example. These creatures have had an enormous impact on the Japanese imagination.

You worked in fifty-eight different locations in Japan. How does one embark on such a project?

The first stage is research: creating an inventory of winter traditions present in the different regions of northern Japan. Then I realized there were also interesting things in the south, and not just in winter. Having made a list of different groups and chosen what I wanted to photograph, I needed to obtain the consent of the subjects, which wasn’t always easy…. In total, I made five trips to Japan, of sixteen to seventeen days each. There is a lot of work involved and the contributions of my assistant, as well as the help of my Japanese gallery and the Hermès Foundation, have been inestimable.

How did you choose the communities to photograph?

Everything starts with visual research. I chose them following visual criteria that appealed to me and to my own aesthetic. It’s a question of   sensations, instincts: of likes and dislikes, of wanting to photograph this but not that… This wasn’t about producing an objective inventory of Japanese traditions. My work is often compared to that of an anthropologist or an ethnographer, because the way I photograph or approach things (what I experience with the different groups, the relationships I develop with the communities) may evoke those disciplines, but I am above all a photographer.

How do your photo sessions unfold?

I’m not doing objective photography. Although there is a documentary aspect to my work, this is not my essential approach. I place these silhouettes in an environment that seems coherent and interesting to me so that they are connected to the background . Everything is controlled, staged, and lit.

My work on Japan is a continuation of the previous series which I did with the idea of constructing an encyclopedic project that extends from continent to continent. While I was initially interested in the connection between an individual and his or her community, now what I want to show is a representation of an imagined identity: how one creates symbolic or supernatural characters who are deeply tied to the community’s own identity.

Why the interest in rural communities in particular?

I come from a rural background: I’m  a farmer’s son and, before studying fine arts, I was enrolled in an agricultural secondary school… So I am inherently interested in people who are close to nature and who work with nature, just as I am interested in rituals and beliefs that persist even as the world is modernizing.

How would you describe your partnership with the Hermès Foundation?

The Maison Hermès became interested in my work several years ago and acquired a few of my photographs. Since then, we have continued working together. The Maison Hermès cultivates artisanal knowledge and a respect for well-executed work and for labor values that are also important to me.  I had just finished the series Wilder Mann, when the Maison Hermès contacted me,  they were  the first to publish photographs from that series in their magazine, Le monde d’Hermès, in 2011. Subsequently, it was also the Hermès Foundation that exhibited them in several locations: in Bern, New York, Tokyo. Over the years we developed a sustained relationship of collaboration. For the third cycle which I will be working on for the next two years, they are simply there: observing, waiting… This has helped me to plan ahead and carry on. One mustn’t forget that a photographer is on his own when working on his projects.  My projects are rather complex in their execution. This is why outside support, in whatever form, not just financial, is important. It’s good to have an interlocutor to exchange ideas and orient oneself. The Hermès Foundation plays that role, just as the Musée du Quai Branly or the Musée de l’Image d’Épinal do: these are all valuable interlocutors.