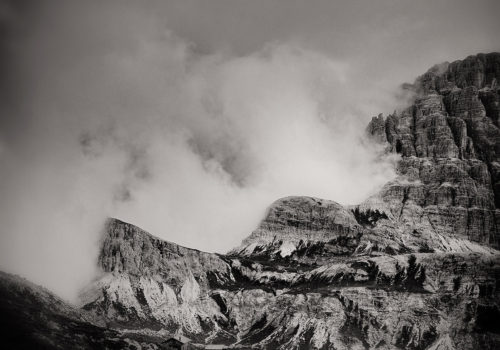 As Edward Abbey said, “Wilderness is not a luxury but a necessity of the human spirit.” Although we belong to nature, for such a long time we have believed we could elevate ourselves above it. Today, it is imperative that we balance the need for “growth” with the ability to protect our greatest richness which is menaced.

I took these photos in the eastern part of Veneto Dolomites, around Lagazuoi, Sorapiss, Tofane and Lavaredo peaks where I have been trekking for years, contemplating a primeval and apparently untouched landscape. Wind, water, ice and heat have been at work on rocks for aeons creating sensuous curves, jagged peaks and smooth canyon walls which reveal to me nature’s deepest soul. Although the Dolomites seem to be characterised by a majestic strength, my goal as a photographer is to raise awareness of their unexpected fragility and particularly of the dramatic effects produced by climate change. Rising average temperatures and continuous temperature changes are creating several problems in this area. First of all, permafrost degradation: permafrost features an average annual temperature of 0°C for at least two consecutive years. The “active layer”, its superficial zone, is where the melting process occurs when temperatures rise. Recent scientific data show that the low-altitude areas such as the Dolomites region feature very fragmented and thin permafrost which is extremely sensitive to climate changes: researchers point out that the instability of the mountain slopes is the main effect of the gradual permafrost deterioration due to the variations in depth and width of its layers. The geotechnical features of the land affected by the passage of meltwaters may lead to considerable instabilities, especially if combined with other effects of global warming as the increase of rainfall. In fact, another effect of high temperatures is the so-called ‘frost cracking’: water from rain or snow melting enters in the rocks; when ice forms, they expand until they crack. Therefore, the possibility of sudden detachments of rocks at higher altitudes is increasing and this could be the reason for recent collapses such as those of Sorapiss, Croda Marcora and many other Dolomites peaks.