Alex MacLean – Impact, Air Visions of a besieged area before the rising waters 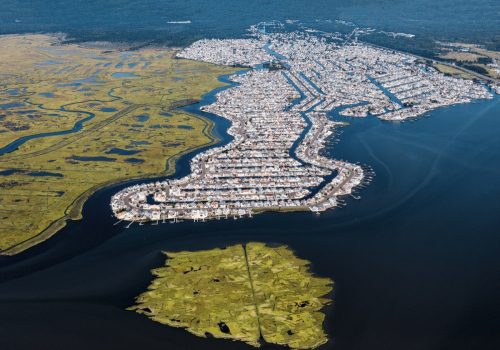 Unlike other effects of climate change that are not experienced in a tangible way on a large scale, sea level rise is a visible and unrelenting indicator of global warming, the consequences of which are felt globally. . Some are still skeptical, but there is nothing to deny that rising sea levels, reinforced by storms and storm surges, cause erosion, flooding, dislocation and catastrophic damage along the coast, and well inland. Sea level rise is also a destabilizing factor in the financial and real estate markets, in particular because of the higher cost of insurance.

The book is a kind of investigation to show, in a striking and concrete way, the environmental, economic and social disturbances related to the rise of the seas. The author has documented the US east coast (from Maine to Florida) and the Gulf of Mexico (from Florida to Texas) as an example of our vulnerability to climate change. The images illustrate the different states of the territories overflown during different seasons, before and after the occurrence of major weather events (storms, hurricanes), when geography and landscape change dramatically.

Alex MacLean has compiled a list of themes to photograph: natural spaces, and their disorderly settlement, public or private defenses, but also coastal infrastructure projects such as airports, nuclear power plants, highways and factories wastewater treatment. The list also includes natural areas such as “ghost forests” asphyxiated by saltwater infiltration.

To tell this story, it was also important to balance the narrative of risk and destruction with a more positive vision. The book therefore also discusses resilience strategies such as natural storm surge systems, or park and “conservation land” designs that can accept floodwater without sustaining lasting damage, all of which have the following strategies: we are an example as awareness of the phenomenon of rising water levels is far from being achieved in Europe. The book is introduced by a brilliant speech by Bill McKibben, one of the major players in climate activism.