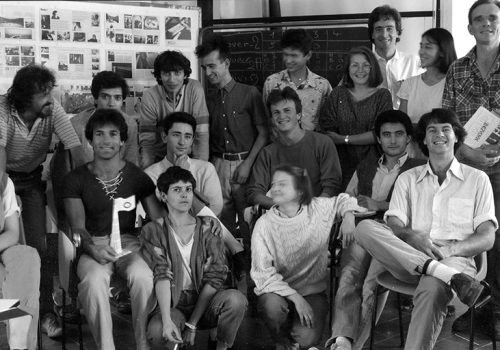 I learned from the columns of The Eye of Photography, from the pen of François Hébel, of the disappearance of Alain Desvergnes. Let me mention two personal episodes here. My first intervention within the framework of the Rencontres d’Arles, it is to him that I owe it as well as to Lucien Clergue obviously, when they both teamed up, in a very complementary way besides: the ANPPM (Association National of Advertising and Fashion Photographers) they entrusted me in 1980 with a projection at the Roman Theater on the history of fashion photography. The two directors of the Meetings had viewed my work the day before: I was not very expert in technique, I had brought slides as well as a recording of a quartet by Debussy and it was necessary to accompany the sequences of images and comment in the cabin above the theater; I remember that the evening of the projection, having difficulty managing the resonance of my voice, Alain immediately lent me a hand to read my text. But this episode especially reminds us of the interest he had at the time in all forms of photography. A few years later, at the very beginning of the history of the school of photography in Arles, he invited me twice to conduct a week-long internship on the layout of photography and the design of a subject in a magazine. We didn’t have a computer yet: it was all DIY with a photocopier and glue, but it was a great pleasure of building a project together. With my friend Thierry Defert, we invented  a form of training that was not yet in use in this young school. Again, Alain knew that we should not only train students in photographic creation but in all kinds of professions that accompany it. I still keep in touch with certain former students such as Fred Boucher, who has been running the Photaumnales of Beauvais for several years, among others: “What I do is completely inspired by my training. And we are a lot of alumni now in charge. ” We can see it in this group photograph in the middle of a happy class: one of the best tributes we can pay to Alain is certainly to show the fulfillment of his students. Another word, that of Christian Milovanoff, one of the two pillars with Arnaud Claass of education led by Alain Desvergnes: “School is him. And he had to wear it and defend it for years … I know he was happy when he learned that so and so was exhibiting somewhere, publishing a book or was in charge of photography in a museum, a center of art, a newspaper. ”

On a proposal by Jack Lang, I am thinking today about a project for a book on photography in France in the 1980s and Alain Desvergnes was precisely one of the protagonists of this rich history that I wanted to question. I will miss his testimony if this book is ever published.