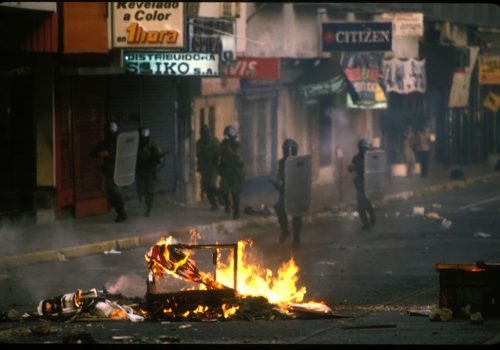 Born in Oregon, Thomas Haley has been living in Paris since the early 70’s when he started as photo-researcher for Magnum Photo Agency. He spent the last twenty eight years to covered for SIPA PRESS political conflict, disasters, man-made and natural. He still collaborate regularly with the major weeklys in USA and Europe. His main interest now, it’s to develop and realize features stories. Jesuits Around the World, the Narmada River Struggle, Bouddhism in Mongolia. He also became involved in the production and realization of multimedia. He is an active member of the UPP photographers association in France where the issues of copy-right and fair business practices in the industry are major concerns.

“The Tunisian uprising, Tahrir Square, civil war in Libya and the fall of the Kadhafi regime, Syria, Fukushima, the Ivory Coast…so many stories! For the photojournalist that I am, it aches not to be where the action is. As usual, each time there is a big story and I am in Paris, best to let me brood in my corner.

Between 1983 and 1995, I was traveling on average 7 months of the year, covering world news. I was part of a small group of international, globe trotting photographers covering death and destruction, wherever it might occur. We ate and breathed news, constantly listening to the BBC or RFI. The world was our theater of action, from Panama to Tiananmen, and from Sarajevo to Erevan.

There were three big photo agencies, the three A’s: Gamma, Sygma, and Sipa. Internationally recognized, they represented French photojournalism at its best and savoir faire for meeting tight deadlines. The wire services (AFP, Associated Press, and Reuters) furnished photos primarily to the daily newspapers, while the “magazine” agencies provided pictures to the weekly news magazines. The distinction between these two types of photo agencies was historic, mainly due to the means of distribution and the business model. Naturally, I make no distinction in talent or professionalism of the photographers between these two models.

Each agency, had it’s own stable of photographers, and its character was determined mainly by the directors. Gamma and Sygma were more organized and it always seemed to us Sipa photographers that those photographers got more support. Sipa was a bit of a madhouse, an “auberge orientale” it functioned more like a big family. Clearly the management style was a bit paternalistic, but the Turkish founder, Goksin Sipahioglu had a passion for journalism and hot news and he gave his photographers free reign to do the stories they wanted to do, nowhere was a photographer more free. Goksin was a great believer in the concept of “creative tension” and he let the natural competitiveness and high concentration of testosterone amongst his photographers determine who covered what story.

The big foreign news story often went to the first one of us who jumped on the plane. Often stressful and chaotic, this editorial method taught us to become better journalists. We imposed our legitimacy on a story by knowing it better than the others, by developing contacts and being prepared for the moment when it was time to go. We learned to anticipate the decisive moments of a story and to be in place to get the shot.
This was usually the best way to assure a deal with a magazine in order to cover the rest of the story.

It didn’t always work that way though. Each departure was like playing roulette and the steel ball didn’t always fall in the right slot. The great news photo does not always happen. No picture, no sale. The photographers who covered international news were more often in the “red” financially. It didn’t matter though because the agency would advance us a monthly allowance to cover living expenses and we knew that one good hit with Paris Match or Stern, Time or Newsweek, would take us out of debt. It was a kind of modern day sharecropper relationship. In any case, money made on sales was always ploughed back into the next story.

We were witnesses to historic events and human drama. We believed that our presence was necessary to inform the world, we attributed a certain nobility to this endeavor. The big story, strong emotions, adrenaline, the possibility of making a great picture and the glory, albeit ephemeral, of a great publication, old friends and new adventures…how could one not be hooked!?

Covering news requires total submission. Much like an unfaithful yet demanding mistress, covering news requires unquestioning availibility. There is no place for family or other projects or anything that takes one’s attention off of being ready to jump on a plane and go. After 12 years of this demanding regime, I grew tired of the stupid servility, of being a hostage to some unforseable event that might happen somewhere in the world. For the sake of my family I wanted to reclaim control of my life. Already in 1995, I suspect that our economic model could not endure, I wanted to make the transition to a more reasonable life rythmn.

During the invasion of Afghanistan by the Western coalition in 2001, I noticed for the first time that practically all published photos, both in magazines and daily newspapers, came from wire services. The names of many of my colleagues covering this story for their agencies had simply disappeared. Yet they were there! Clearly the magazine agency model was no longer in phase with the news photo market. We were already well into the digital age; as a result the magazine agency and the wire service were on the same playing field, the two markets had fused into one and we also became victims of globalization.

It would seem that the Press no longer needs our photos, our specificity no longer has reason to be. Sygma and Gamma have already disappeared and the future of Sipa is quite uncertain. Today it would seem that it is commercial agreements and large conduits distributing content that determine the choice of a photo rather than the visual quality, or a professional relationship. A fair price is no longer part of the equation. I fear that the new economic model would like to transform photojournalists into des “presse boutons” in order to fill these content providing pipes rather than having to deal with perhaps difficult, but nonetheless thinking photographers.”