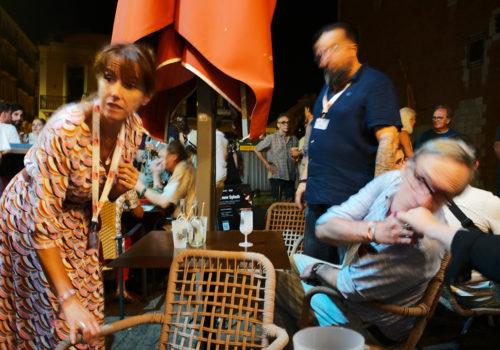 Yan Morvan attended Visa pour l’Image in Perpignan. He gave us these images and this text.
Thanks Yan!
JJN

We could describe Visa 2022 in songs… “Avec le temps”, ” la ballade des gens heureux”, a music: “Once upon a time in the West”, “Gunfight at O.K. Corral”… But like these hummed tunes so often unforgettable we would always wish to keep them alive.

Visa is the vintage party of a bygone era of photojournalism. An excellent vinyl record with grooves that have written the history of the world for the past thirty years.

The exhibitions show the same images as thirty years ago; wars, famines, disasters… To make it modern, we added a touch of ecology and the defense of nature. The scenography is non-existent, walls lcovered with images that follow one after the other… sometimes we could even confuse subjects and photographers…

The public is present there, attentive to deciphering the captions written very small in the labels that decipher the images.

Sometimes on a dare a large picture! But here we are not in Arles! What is important is meaning not decoration.
On stage the high priest Leroy officiates… he wobbles from one end of the stage to the other, exhausted with fatigue… his baby barely lets him sleep…

We sometimes run into known faces, less and less, alcohol and tobacco have decimated a living environment of precariousness and extinct glories.

Young photographers are still just as determined and enthusiastic, the newsrooms are eager for cheap new blood. This year we mainly speak German and American, the war in Ukraine has awakened the international photo services. Americans pay $600 a day of war, it’s the holy grail for photographers who beg appointments from the heads of the New York Times, Washington Post and Wall Street Journal…

Paris-Match The title partner of the great Visa years has abandoned the ship, too absorbed in the episodes of “upgrading” in the mergers of the industrial press.

Canon is still there, until when? SLR cameras are no longer sold! make way for hybrids…

The restaurant opposite the café de la poste has burned down! A criminal act it seems… Under the Alliot era, the city has been gentrified and cleaned up to attract more tourists; The gypsies, many of whom voted RN, have been pushed away from their historic neighborhoods to the outskirts of the city.

I find familiar faces – only here can I see them gathered… JF Leroy created a star that is gradually dying out – it shone with a thousand lights – revealed talents – promoted and revealed impossible stories – brought together characters from all over the planet sharing the same passion – The world of tomorrow will be merciless for these image-pioneering adventurers. We will not end with der Abschied, the sublime end of the song of the earth by Gustav Mahler.