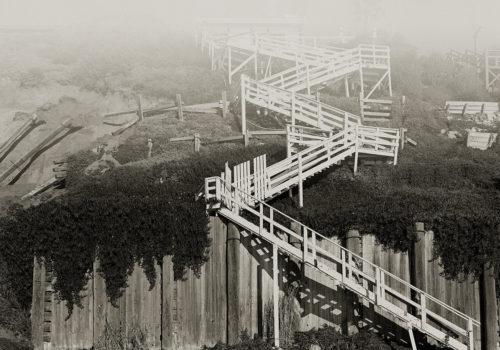 X Artists’ Books and DoppelHouse Press announce the joint publication of Amir Zaki’s Building + Becoming. This publication brings together 272 pages of full color work by the Orange County, CA–based hyperrealist photographer, accompanied by an interview with curator and writer Corrina Peipon and an essay co-authored by critics Jennifer Ashton and Walter Benn Michaels.

Building + Becoming is a sculptural monograph, designed as a double gatefold which opens to a full width of roughly forty inches, allowing the reader to explore both sets of images and texts in different combinations. The multiple series by Zaki captured within these sets address, respectively, the built and the natural, including rocks, carvings, suspended landscapes, and manipulated California beach architecture. Like his skateparks these environments are uncannily quiet and devoid of people.

Corrina Peipon’s interview with Zaki explores the artist’s personal history and concerns about photography and technology. “I am interested in the attraction and repulsion that a photograph which depicts something familiar and unfamiliar, initially welcoming yet somewhat alienating, can elicit in a viewer and me. I am looking for a kind of strangeness within the commonplace. Ultimately, I use digital technology as a means to an end. I am trying to make photographs that manifest the world I desire.”

Jennifer Ashton and Walter Benn Michaels’ essay offers insight into Zaki’s manipulation of space through “evenness,” which is accomplished by creating a perfectly technically focused object: “The point is not that the pictures overcome physical limits, but that they violate the logic of our eyesight.” Referencing the history of landscape and modern photography in California, Michaels and Ashton show that Zaki’s insistence on marrying technology seamlessly with this tradition results in continuity, an “addition through subtraction” of the third-dimension.

Amir Zaki received his MFA from UCLA in 1999 and has been regularly exhibiting nationally and internationally since. Zaki has had over 30 solo exhibitions at institutions and galleries and has been included in over 50 group exhibitions in significant venues including The California Biennial: 2006 at the Orange County Museum of Art, the Whitney Museum of American Art in New York, Western Bridge in Seattle, the California Museum of Photography, Museum of Photographic Arts in San Diego, the San Jose Museum of Art, and the Nevada Museum of Art. He has published three prior monographs and has been featured in Phaidon’s survey Vitamin Ph as well as the anthology Both Sides of Sunset: Photographing Los Angeles.

Jennifer Ashton is Professor of English at University of Illinois Chicago whose research and teaching focuses on poetics and the history of poetry, with a particular emphasis on modern and contemporary American poetry. Her book publications include From Modernism to Postmodernism: American Poetry and Theory in the Twentieth Century (Cambridge University Press, 2005) and an edited volume, The Cambridge Companion to American Poetry since 1945 (Cambridge University Press, 2013). Her articles and essays have appeared in ELH, ALH,Modernism/Modernity, MLN, Interval(le)s, Chicago Review, and numerous edited collections.

Walter Benn Michaels is an American literary theorist and author whose areas of research include American literature (particularly 19th-century to 20th-century), Critical Theory, identity politics, and visual arts. He is the author of several books, most recently The Beauty of a Social Problem; Photography, Autonomy and Political Economy (University of Chicago Press, 2015). Michaels has produced works connecting postmodernism, neoliberal capitalism, and socioeconomic inequality. Two of his best-known books are Our America: Nativism, Modernism and Pluralism (Duke University Press, 1995) and The Shape of the Signifier: 1967 to the End of History (Princeton University Press, 2004).

Corrina Peipon is an artist, writer, and curator working as an independent consultant in Los Angeles. Peipon has previously held roles as director of The Pit in Glendale, CA, and Honor Fraser gallery in Los Angeles, CA, and as assistant curator of the Hammer Museum in Los Angeles, CA. She has curated numerous exhibitions and has contributed to publications including Lucy Raven: Low Relief (MOUSSE PUBLISHING and Rensselaer Polytechnic Institute in association with Portikus, 2017); Die Kränken: Sprayed with Tears (ONE Archives at the USC Libraries, 2017); and If the Head Fits, Wear It (Matthew Siegle, 2017).

DoppelHouse Press is a character-driven publisher that focuses on memoir, art, architecture, design, and music, often encompassing histories of migration and diaspora. Their mission is to bring together a plurality of voices to examine the dynamics between socio-political forces and aesthetic forms.

X Artists’ Books, established in 2017, is a small publisher of thoughtful, high-quality, artist- centered books that fit within and between genres. XAB’s books are works of art; portals to imagined worlds; treasured companions; the fabric of a community.