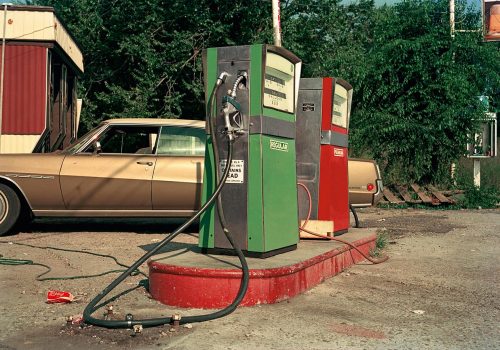 In 1977 William Eggleston released Election Eve, his first and most elaborate artist’s book, containing 100 original prints in two leather-bound volumes housed in a linen box. It was published by Caldecot Chubb in New York in an edition of only five, and has since become Eggleston’s rarest collectible book. This new Steidl edition recreates the full original sequence of photos in a single volume, making it available to the wider public for the first time.

Election Eve contains images made in October 1976 during Eggleston’s pilgrimage from Memphis to the small town of Plains, Georgia, the home of Jimmy Carter who in November 1976 was elected 39th President of the United States. Eggleston began photographing even before he left Memphis and depicted the surrounding countryside and villages of Sumter County, before he reached Plains. His photos of lonesome roads, train tracks, cars, gas stations and houses are mostly empty of people and form an intuitive, unsettling portrait of Plains, starkly different to the idealized image of it subsequently promoted by the media.

Born in Memphis in 1939, William Eggleston is regarded as one of the greatest photographers of his generation and a major American artist who has fundamentally changed how the urban landscape is viewed. He obtained his first camera in 1957 and was later profoundly influenced by Henri Cartier-Bresson’s The Decisive Moment. Eggleston introduced dye-transfer printing, a previously commercial photographic process, into the making of artists’ prints. His exhibition “Photographs by William Eggleston” at the Museum of Modern Art in New York in 1976 was a milestone. He was also involved in the development of video technology in the seventies. Eggleston is represented in museums worldwide, and in 2008 a retrospective of his work was held at the Whitney Museum of American Art in New York and at Haus der Kunst in Munich in 2009. Eggleston’s books published by Steidl include Chromes (2011), Los Alamos Revisited (2012), The Democratic Forest (2015) and Election Eve (2017).