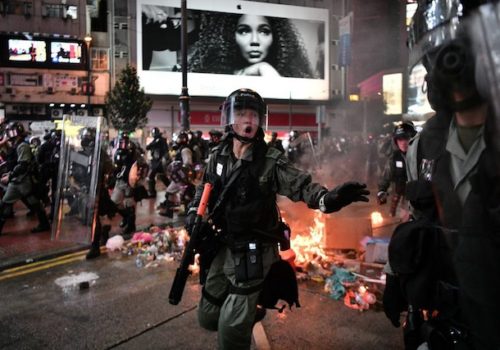 Anthony Wallace (“Opposing Views”) and Nicole Tung (“The Protesters”) exhibit their photographs at Visa pour Image. They have both decided to cover the protests in Hong Kong and offer two views of one of the biggest pro-democracy events of recent years.

It’s one of the highlights of 2019. In Hong Kong, people took to the streets to protest against a bill of extradition to mainland China. The protests were violently repressed by the pro-Beijing security forces. At Visa pour l’Image, this current event is given a double treatment: the photographers Anthony Wallace (exhibited at the Couvent des Minimes) and Nicole Tung (at the Dominican Church) both documented the clashes and offered slightly different points of view.

On the coverage of protests and scuffles, the logic is the same. We see violence, tear gas from the police, molotov cocktails from demonstrators, arrests. In Wallace pictures, the movement is very present: in a photo, a police officer takes off to hit a young boy with his baton. It also immortalizes the flight of demonstrators along a building or into the sewers, when law enforcement approaches.

However, Wallace largely confined himself to gatherings near the Legislative Council compound and at the Polytechnic University. While Tung has broadened her work to other parts of Hong Kong. She explores the fog of tear gas in the alleys, but also the metro, some stations of which had been closed to prevent protesters from circulating in the city-state.

At the heart of the action

Anthony Wallace and Nicole Tung are both in the thick of it, there’s no doubt about it. But in Wallace’s shots, you often see other press photographers or cameramen covering the scenes at the same time as him. A bias surely voluntary. Tung, on the other hand, gets down to the level of her subjects more often: for example, she finds herself almost facing a slingshot when a protester is about to shoot.

Photographers really differentiate themselves on the overall treatment of their projects. Anthony Wallace focuses mainly on the clashes, and especially on a few specific nights, such as when young people are holed up on the roof of the Polytechnic University.

Nicole Tung, for her part, wants to show that life goes on, in cafes or in the midst of clashes. In one photo, a shopkeeper closes his store in the face of the riot police heading towards protesters. “The unwavering hope” of Hong Kongers and young demonstrators alike survives, she writes in the opening text of her exhibition, “despite increasingly gloomy prospects for the political future of Hong Kong” .