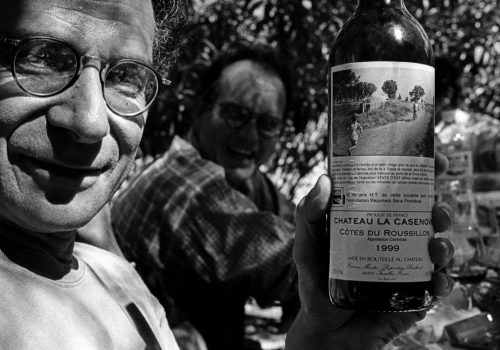 In 2012, Claudine Vernier-Palliez wrote on the other traditional lunch of the festival, at Etienne Montès, this Gamma photographer turned winemaker in the south of France.

There are the lunches on the beach of Torreilles hosted by Paris-Match. The fight for invitations is bitter, with punches thrown and false promises of gratitude, eternal gratitude, so important is it to be seen alongside Jean-François Leroy and festival heads, pretty reporters with tanned asses and cleavage. There are the secret and slightly paranoid business lunches, where lucrative contracts are negotiated with the same bitterness. Finally, there are the lunches at the Casenove where there’s nothing to negotiate because humor, generosity and elegance are non-negotiable.

La Casenove, in the Trouillas commune, under the watchful eye of Canigou mountain, was a former possession of the Templars. A rickety 14th century tower dominates the property, full of quaint rooms haunted by a much younger ghost, a fin-de-siècle youth wearing short pants and a sailor outfit. Etienne Montès, who owns the land, has covered wars in Latin America and other conflicts across the planet. His images were seen across the world (something he never mentions), before he gave it all up to take over the family property. “Fifty-three hectares in the family for 400 years. It’s not always interesting, but it’s unthinkable that it might one day no longer exist.”

All year long, with or without a kitchen, the Montès family welcomes friends that are passing through. Many stay for days or weeks, feeling as though they were living a piece of eternity. Chris Laffaille comes to write. So do Patrick Chauvel and Anna Pitoun. They each find a corner for themselves in the large house, come together for meals, drink the wine made by Etienne Pla del Rei or the Commandant Jaubert, a famous adventurer and navigator and relative of Etienne. In reality, we have lunch every day at the Montès, and every single day Frédérique prepares a new dish, and Etienne discovers yet another reason to celebrate wine and friendship.

Read the full of text of Claudine Vernier-Palliez’s article in the French version of Le Journal.