Utopia Dystopia : The myth of progress seen from the South 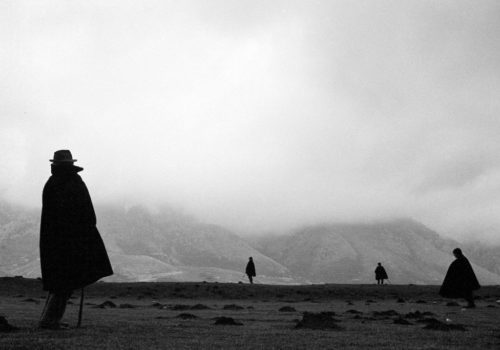 The exhibition, on show in Naples, deals with contemporary practices connected to the massive social changes of the last half-century: urbanization, industrialization, the creation of new urban peripheries, the demographic transformation of rural space, struggles related to bodily choices, freedoms and constraints. Utopia Dystopia: the myth of progress seen from the South shows works by some 55 Italian and international artists – all of them in relation both to the Campania Region and to the Madre’s collection.

The focus is on the contrast between utopian promises and dystopian experiences of modernity. The analysis especially deals with Southern Italy and the representation of the violent logics and contradictions underpinning economic progress. From Mimmo Jodice’s observations of peripheries, industrial architectures and southern landscapes in the Sixties and the Seventies, to Antonio Biasiucci’s photographic tributes to abandoned villages and pastoral life in Campania, to Raffaela Mariniello’s and Ibrahim Mahama’s investigations of the industrial area of Bagnoli, with its powerful and toxic beauty.

Human beings can reshape their lives and environments with the help of technology and science, the modern ideology of progress says, so creating new perspectives for the future. New freedoms were promised to women and others that had been historically marginalized or economically disadvantaged. But these utopian visions often never come to fruition. So many found themselves isolated in the suburbs, with precarious, poorly paid and often dangerous work.

Since the late sixties, several artists have been contributing creating utopian spaces for knowledge sharing and artistic experimentation in the periphery, especially in the Neapolitan context. Several artists focused their research on questioning, from a historical perspective, the established order and accepted norms. According to French sociologist Pierre Bourdieu, neoliberalism is ‘a program designed to destroy collective structures capable of obstructing pure market logic’ (Le Monde diplomatique, December 1998). In the South, however, these structures and values are still preserved and existence is often collectively celebrated, with a perspective of another future.

The Utopia Dystopia exhibition is composed of sections, like Urban Space as opposed to Rural Space, where Bianco-Valente decided to pose the question to all the inhabitants of the village of Roccagloriosa in the Cilento region: ‘What is missing?’. This very question is suggested by a phenomenon as the continuous flow of younger people to the cities. Also included is Peripheral Space, dealing with the fact that during the post-war period, the urban working class was relegated, along with the newcomers from the countryside, to peripheral areas: their housing area was a sort of forced exile.

Other sections are devoted to the Extra-territorial Space and the Space of the Body. The modern promise of progress in social recognition for women and others discriminated against because of their sexuality or cultural origin becomes the focal point of artists’ research on how the body interacts publicly and privately.

As for the Industrial Space, the link is to the Bagnoli area: since 1910 to 1992, in the 2000 sqm on the bay of Pozzuoli, has been the fulcrum of the mass production of steel, causing environmental pollution across land and sea, bringing with it also the conflict between health and working conditions, which has become topical once again, in a different way, during the Coronavirus pandemic.

The exhibition is curated by Kathryn Weir.

Utopia Dystopia: the myth of progress seen from the South