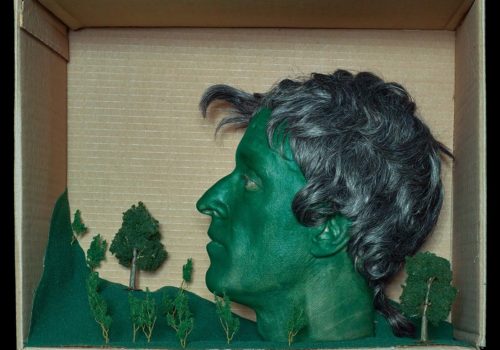 David Henry Nobody Jr is an alter-ego character known for FLUXUS inspired, bizarre characters utilizing masks and wearable sculptures composed of consumerist detritus. A self-titled practice, “Resemblage” (resemble and collage), humorously and disturbingly explores the dark side of American pop culture and politics, questions humanity, notions of “the self” and modern day narcissism with the rise of social platforms.

The artist’s mixed-media approach to constructing this performative armour sees Nobody Jr. combining found object, paint and the body to reveal “unwilling self-saboteur” characters, lost in limbo between the self and the external consumerist world. Hinting at the Dionysian, characters are pleasure-seeking yet grotesque, unable to recognize their unsightly and alien forms.

The quick rise of social media, radically redefining the portrayal of the self, has also enabled the rise of the online persona, the donning of a ‘digital mask’. Nobody Jr explores this fabricated self and how to use this exploration as a means for self actualization.

“My experiences watching the Trump presidency and the public’s reaction to the Virus show that the spin or recording of something can often be more important than reality. In a world becoming harder to decipher between reality and “fake news” facts and science can be denied. Resemblage can be hideous in its truthful damnation of the propaganda of its time. I’m just playfully showing what I feel and see, much like artists like Otto Dix did in other dark political times. Like a clown, I am complicit in the self deception of the now.” David Henry Nobody Jr.

The series is available for viewing on the Platform site through Jan 31 in the link here.

David Henry Nobody Jr. is an artist based in New York. Since the early 1990’s Nobody Jr has been showing in NYC and internationally, producing numerous creative “actions” and objects including the Human Weeble Wobble. He is notoriously known as the “bad boy artist” who impersonated Alex Von Furstenberg for a year, crashing countless VIP parties in NYC in 2000. The project became his first solo show and caused a national media scandal after he publicly exhibited photos documenting his interactions with President Clinton, Sarah Jessica Parker and even the real Alex.

Nobody Jr. predicted the Trump presidency in his 1999 Stalking Trump series in which he tried to meet Donald Trump as many times as possible in one year. He independently created “Trump for President 2000” signs, testing public reaction in a series of prescient street performances documented in video.

David is a founding member of the Fantastic Nobodies, a renegade/outsider/performance art collective, which was a collaboration of five artists, 2003-2013. The Nobodies have shown in Berlin and in New York most notably with Andrew Edlin Gallery and at WhiteBox. Recently the artist presented a solo show and performance series at MOCA Tucson.

His work has been featured on the BBC, VICE, The Creators Project, Insider, Observer, Whitehot Magazine, Bedford and Bowery, HiFructose, Ravelin Magazine, among others.

10% of proceeds from all Platform exhibitions are donated to a charity of the artist’s choosing. David Henry Nobody Jr has chosen to support The Campaign Against Hunger: an organisation that helps thousands of vulnerable New Yorkers by giving them the food and resources they need to survive.