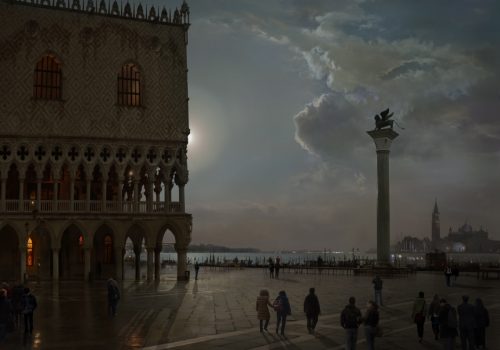 50 years ago, the first man stepped onto the moon and since this historic moment, it stimulates our imagination: it’s unbelievable beauty enchants us every time we look at it. photomeetings luxembourg 2019 celebrates this occasion with an exhibition by Hiroyuki Masuyama, Robert Pufleb and Nadine Schlieper.

The exhibition opened on September 13th, while simultaneously the annual moon festival called “Tsukimi” takes place in Japan. This ancient Japanese tradition, which translates into “moon viewing”, goes back to the 8th century.

Planned on the same date, the “Moon Show” brings two unique photographic positions together. United by a common subject, but with a very different concept of visual imagery, the authors play with our “perception of images” in an age of fake news and alternative facts.

The spatial installation and presentation of the photographs create a state of suspense between fact and fiction, forming a field of magical tension. Fascinating photographic interpretations of William Turner and Caspar David Friedrich paintings meet mysterious black and white photographs of unknown moons, whose origins and provenance can’t be traced back without in-depth research: “Alternative Moons”.

A selection of the two series mentioned above is featured at Galerie Clairefontaine, Espace 1.

Robert Pufleb will give a lecture and host a workshop where participants will get an overview of his working method and his “professional journey”. “Alternative Moons” is a joint photo project by Robert Pufleb (DE, 1969) and Nadine Schlieper (DE, 1976), which appeared as their first photo book under the same name – now in its third edition. The work of the duo examines universal conventions of perception as well as our consumption behavior in relation to visual media and the associated possibilities of manipulation. The result creates an atmosphere of ambivalence and invites you to question the secrets of the real visible. Pufleb will present his newest photo book, as well as some projects he is currently working on. In 2017, he and Nadine Schlieper won the “ViennaPhotoBookAward” with “Alternative Moons”. www.alternative-moons.com

Hiroyuki Masuyama (JP, 1968) is the most famous Japanese artist living in Germany. The photographer, video artist and sculptor has created an extensive oeuvre in which he is dealing with time and space in a complex and yet highly sensual way (Cornelia Röder, From Flowers to the Digital Garden, Staatliches Museum Schwerin). Hiroyuki Masuyama miraculously followed in the footsteps of the English painter Joseph Mallord William Turner (1775-1851), and has re-created many of Turner’s paintings with the medium of photography, e.g. the Luxembourg-image on the cover of this year’s invitation. Often, his photographs have a romantic moonlit atmosphere. His lecture will be followed by a Q & A session.