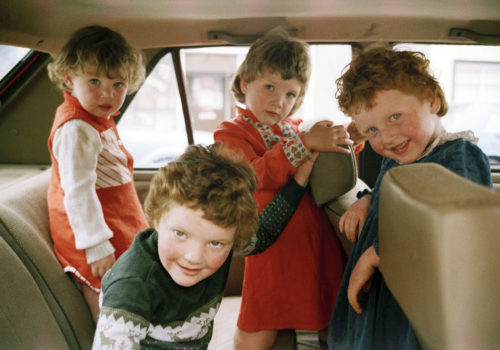 Tom Wood’s photography has been acclaimed before in The Eye of Photography, but a new book pushes the envelope and offers a new perspective on the nature of his achievement. Until now, his oeuvre has been associated with pictures of the everyday lives of working-class citizens in England’s northwest. Indecisive moments – whether occurring while holidaying, hanging out, riding on a bus, shopping at a market or nightclubbing – are caught in all their utter transitoriness. His chronicling of street life has been informed, if not defined, by an engaging generosity of spirit and a politeness of the heart; qualities that go against the grain of the UK’s ruling zeitgeist.

The genealogy of Irish Work lies elsewhere, in his trips back to the country where he was born and raised for the first three years of his life. ‘I always felt I was going home’, he says of the family farm in County Mayo to which he returned every year with his father. When he came ‘as an art student with camera in hand, everything seemed to have meaning and I began to photograph constantly.’

Although the subject matter of Irish Work is different – fields instead of pavements – a line of continuity from previously published work is clear. Wood has always warmed to ordinary people and been aware of social and economic constraints affecting their life chances, an affection undiluted by nostalgia or soft liberal affiliations that would inhibit a sense of kinship with those whose existence is not cushioned by affluence or class confidence. The style of his photography, characterised by an absence of artifice, brings to mind Helen Levitt: an interest in people is an immanent presupposition of their work, founded on a quirkish, inquisitive eye for the poetics of the quotidian.

During his annual trips home, Wood photographed what were then quintessentially Irish scenes: cycling (not for leisure), the feeding of hens, making hay, digging turf, spraying potatoes. They invest the book’s title with a literal dimension but the subject matter includes contingent moments of leisure: attending an agricultural show, drinking in a pub, chatting at a street corner. Physical landscapes provide the essential context for these scenes and there are pictures of the countryside featuring cows on roads, tractors in fields, sheep on exposed land, farmhouses (some with abandoned interiors after owners’ emigration). Interlacing all of this are impromptu shots of family and friends who converse, work, and take time out.

What is remarkable throughout is the un-remarkableness of the images.

Most of what is depicted will be familiar to anyone who spent time in Ireland before the ‘Celtic Tiger’ began to roar in the mid-1990s, sending the economy into overdrive and precipitating a seismic shift in traditional social attitudes and the contours of the urban/rural divide.

What sutures this selection of Wood’s photographs (whittled down from more than a thousand), made in the west of Ireland between 1970 and 2019, is a wistful recording of splinters from a social substance that no longer exists. From the passage of time, a space for what is absent emerges, a space not just for people now deceased but also for something more intangible. The pictures become a visual representation of Lacan’s objet a, that which stands in for a void, the filling of a lack.

The void is experienced as loss and an Ireland of the past fills the gap that loss creates. This comes about only in retrospect, through the bringing together and arrangement of pictures that were not taken with foreknowledge of their future use. In this sense, finding what is felt to have been lost emerges as the retrospective effect of looking for it in the act of return. The returning creates not just the restitution of a felt loss but that which is felt to have been lost and now found, a paradox expressed by Žižek in The Parallax View in suitably riddling terms: ‘that to which the process of returning is returning is produced by the very process of returning.’

This may seem too abstract for its own good given the strict empiricism that accompanies Wood’s odyssey into the past. Each one of the images is tabulated at the back of the book by a date and a brief description by way of location, name or wry description. A list of what camera type was used, over what period of time and the film format is also provided. A level of objectivity insistently asserts itself, the people and the scenes were real, and the book stands as a loving homage to bygone existences.

Irish Work, by Tom Wood, is published by RRB Photobooks.