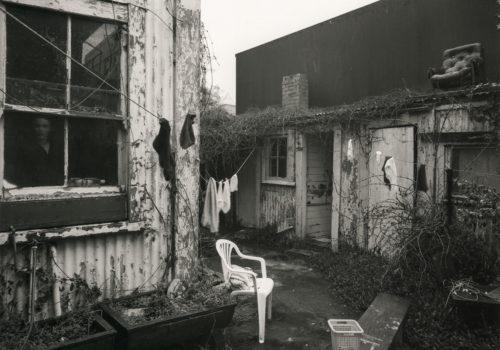 A photo exhibition telling the story of ‘the Wellington house’ and the upheaval that took place in the heart of New Zealand’s capital when the inner-city bypass was constructed in the early 2000s opened this week.

Billed by curator Graham Frost as a “conversation across time between two artists”, The Places We Called Home brings together the work of Andrew Ross and Cody Ellingham; two photographers capturing the history of urban Wellington 20 years apart.

The free exhibition opening on 26 November at Wellington’s Toi Pōneke Arts Centre explores the changing face of inner-city neighbourhoods like Te Aro and Newtown – once home to hippies, artists and activists – through a nostalgic pairing of Ross’ black and white stills from the 1990s with moonlit photos shot by Ellingham over the last two years.

“The Places We Called Home is a fascinating exploration of that very real tension between progression and regression,” says Frost.

“It delves into concepts of community and the nature of progress and poses the question, ‘is this really better?’.”

Ellingham has a growing international reputation for his night photography, with past exhibitions New Zealand Nocturnes, Danchi Dreams and Future Cities catching the attention of international art media and major media outlets including The Guardian, CNN and Wired.

Originally from the Hawke’s Bay, his photos in The Places We Called Home are taken by moonlight, from the perspective of an outsider looking in and drawing their own conclusions about the lives of those living there.

Ross’ photos – printed from large-format black and white film negatives – have a different feel entirely and were shot during a period in the 1990s and early 2000s when he lived in a derelict building at the end of Riddiford Street.

While some of his images will be shown for the first time as part of this exhibition, others were originally displayed at a 2005 fundraising exhibition to raise funds to fight the inner-city bypass.

“I think they are more relevant than ever now that our consciousness is heightened about climate change and what’s important about urban living.”

“In Wellington at that time there was a unique way of living that was being squeezed out of cities. It was a low rent city then; now you are wedded to a high-cashflow lifestyle if you want to live here.”

Ellingham is a more recent arrival to the capital, having moved to the city after six years living in Tokyo and travelling through the bustling metropolises of South East Asia.

He says “there’s a certain grit to Wellington houses” that draws his eye and makes them unique. Many of the city’s houses are worth vast amounts of money – even those that are rundown – making them ideal subjects for an exhibition that explores ideas of value, community and what it means to call a place home.

“A home’s value is much more than the price it will fetch as a piece of real estate. It has a rich history and meaning to the people living there, and for many New Zealanders home ownership is closely connected to belonging and fulfilling the Kiwi dream.”

“In many ways the form of the houses Andrew and I have photographed is timeless, but different people have washed in and out of them, like the coming and going of the tide.”

The Places We Called Home runs at Toi Pōneke from 26 November until 18 December. The gallery’s location is a poignant one, just one block away from the inner-city bypass route and Regan Gentry’s sculpture Subject to Change – a skeletal sentinel on the motorway’s edge which mimics the buildings that were around it during the bypass’ construction.