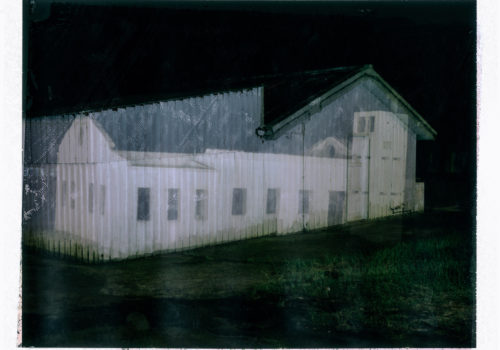 The genre of landscape, the attraction to territories which question geographical limits, like coastlines, volcanic zones, underground places, forests and mountains, remote and inhospitable locations, (apparently) on the edge of civilisation, which discourage humans from inhabiting or even visiting them because of their extreme topography and meteorological conditions, constitute one of the main axes of Tito Mouraz’s photographic images.

At the same time, we can also see that his work is predominated by images which demonstrate a rigorous sense of composition, which favour clarity and aesthetic sobriety, in other words, images which follow genealogies of the documentary style. Yet, in a more careful and exacting analysis, we realise that Tito Mouraz’s photographs are not entirely documentary or even objective, by virtue of their rhetoric linking the descriptive domain with the speculative, aesthetic and reconfigurative potential of the image. Thus, we can say that the photographer departs from the conventions of the objective image in order to seek a broader and more effective subjectivity.

The series Mergulho [Dive] is the result of a recent foray into the Azores region. This isn’t the first time that the photographer has worked in the Azores, in this fragmented and floating land which challenges things’ sense of volatility and how they are perceived. The images show us landscapes, places and details of nature and human occupation. The atmosphere is silent, but in it we sense the action of the wind and the ocean waves on the coast. Water, rocks and stones, light and darkness, day and night, are represented as immanent elements of a reality inhabited by movements, flows and mutations. This gaze was clearly prepared, and willing, to sensitively and meditatively experience the unique and peculiar nature of a territory heavily influenced by a conflagration of times and movements – geophysical, sensory, fictional, aesthetic.

For this new series, the photographer chose to use instant film, a decision which involved substantial changes to his usual methods of production. When this type of film is used, it produces a positive image on photographic paper and a negative film with a layer of chemical matter, which is what comes into contact with the paper and generates the positive image. In this chemical matter we see a precarious copy of the image (less sharp and less detailed, often containing imperfections) which can be transferred to another paper support. This transfer process must be carried out straight after the positive image is separated from its negative. It is a complex and imprecise process which, depending on the characteristics of the image and ambient temperature and light conditions, can give rise to transformations in the representational quality of the image.

Looking at these images in Mergulho, one realises that, as well as the photographed themes, Tito Mouraz aims to reflect on the range of possibilities of the photographic medium, even attempting to draw connections with other modes of artistic expression, like painting and drawing. One group of photographs is distinguished by its representative clarity. The images are transparent, privileging the gaze and recognition of the subject, like realities we could find in the world: a dirt track, details of the earth and rocks, a ladder into a natural swimming pool, a low wall, the metallic structure of a billboard. Because of the darkness, or the viewpoint, the photographs have no horizon; they are closed, opaque planes, which prove photography’s effectiveness in the constitution of a two-dimensional world.

The remaining photographs, which form a bigger group, are the result of transfers of the chemical layer. In visual terms, they are less homogeneous with regard to the size of the plane and the strictly figurative sphere of the image. We see the overlapping of

different images (because several transfers can be made onto the same support), which merge to create spectral and phantasmal realities. In other cases, we come across images in which the chemical process has given rise to visual disruptions – which range from variations in density and colour (like yellow seawater) to the constitution of abstract marks. They are, therefore, images profoundly affected by chemical mediation, which produce shifts towards visual domains that break with the usual expectation of photographic effectiveness in the relationship between representation and represented. An unstable and impermanent imaginary world, which is a good thing, because it guarantees one of the greatest incentives of artistic practice, the opportunity for a different perspective, one that is suggestive and productive, capable of mobilising what is most subjective, intuitive and projective in the spectator.