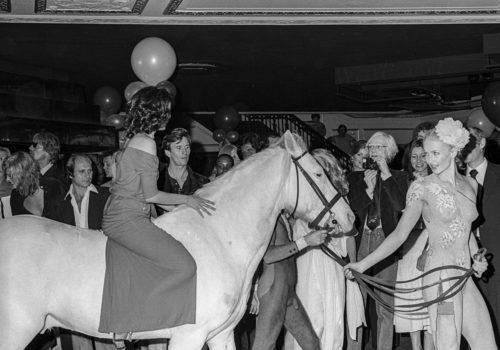 When thinking of the good old days I am frequently reminded of James Herlihy’s 1966 novel Midnight Cowboy which invites the reader into the now almost forgotten world of New York City loft parties and the clandestine environs that acted as a container for the thriving art and music scenes that were centered around downtown Manhattan. Unlike the later film, the book demonstrates a view into the somewhat antique realm of intersection that nowadays is the province of corporate power.

A crumbling sculptural dinosaur surrounded by an equally decrepit urban landscape takes up a two page early spread in Eric Kroll’s new photography book The New York Years. The extinction of the grand New York edifice all around the thriving art and music scene is a fitting juxtaposition.

Like the world of Midnight Cowboy, the film and book, Kroll presents a kind of visual novel that captures the intersection of art, music, photography and sex that were driving forces in the downtown community. Kroll somehow was everywhere at once. Almost in a journalistic capacity but somehow a willing participant in the revelries.

His visual style is both formal and casual simultaneously. There is a knowing wink to the viewer as they are admitted into both public and private settings.

Kroll’s shots have a painterly quality that is repeatedly presented as he delves into the world of street art. Series’ of murals, walls covered in graffiti, and the detritus of tumultuous artist studio interiors exist as their own creations often independent of the subject matter.

Eric’s connection to classic photography is evinced by the remarkable images of the greats that he interacted with. Brassai, Kertesz, Ansel Adams, Mapplethorpe are depicted and I can only wonder how the fuck Eric wound up with a shot of Berenice Abbott.

The experimental and blossoming underground art scene is a major component of the book. Charlotte Moorman plays Nam June Paik in lieu of a cello. A typically brooding Kenneth Anger and an untypical cheerful Joseph Beuys stare at the viewer. All the heavyweights are documented. Of course Andy is central as so much revolved around Andy.

All these disciplines going on at the same time and I see Eric as a seamless connector who was navigating the social, artistic and journalistic worlds that were where everyone lived. All through it are the sexy images of men and women that I fondly recall. I remember Eric as the sexy photographer who always had great images of the girls. Some of the other stuff in the book has been a revelation to me. This guy has been in the epicenter. When I look at this material I get a very physical connection to the times and people that are depicted, the characters the dirty streets and the excitement and energy that permeated it all.

Fittingly for me the book ends with a longish section of images of my long time partner and collaborator, Debbie Harry. Like Eric, Debbie existed in many worlds at once; fashion, music, and the art and film scenes.

The phenomena that’s portrayed here has connections to the present day, the city still is powered by these foundations that Eric explored. It’s great to see it all in one place.
Chris Stein