Best of February 2020 : The World According to Roger Ballen 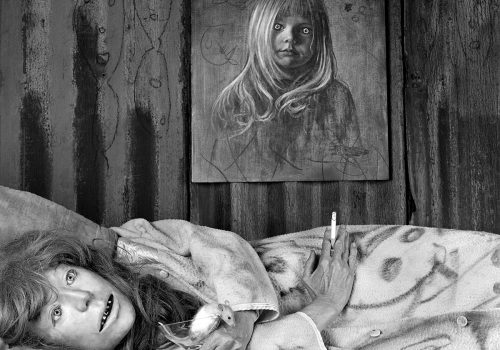 “I often hear people referring to my photographs as disturbing, dark, scary … It is obvious to me that this response reveals a state of mental repression, a mind that is talking to itself, one that is divided and in denial. Unfortunately, until this tendency towards repression reverses itself, in some unpredictable, mass psychological revolution, human behavior is such that, as a species, we are likely to repeat our mistakes of the past.” — Roger Ballen (from an interview with Martine Lusardy)

Throughout his career, Roger Ballen has pursued a singular artistic goal: to give expression to the human psyche — to explore, visually, the hidden forces that shape who we are. The World According to Roger Ballen (Thames & Hudson, January 14, 2020), provides a unique overview of the life and work of one of the most distinctive art photographers practicing today.

Co-authored by Roger Ballen with curator and art historian Colin Rhodes, this compelling retrospective monograph looks at Ballen’s illustrious career in a wider cultural context beyond photography. It includes his connections with and collections of Outsider Art – or Art Brut, as coined by one of Ballen’s most important influences, the French painter and sculptor Jean Dubuffet. It features photographs and drawings selected from across Ballen’s oeuvre, along with images of installations and objects and works from Ballen’s own collection of Art Brut.

The World According to Ballen introduces never-before-published photographs taken by the artist’s long-time artistic director, Marguerite Rossouw. In these images, Ballen inserts himself in the sets and installations where he creates his photographic works; he always appears in character and caught deep in thought. The book also showcases some of Ballen’s most iconic black and white imagery, alongside unpublished black and white photographs and his most recent unpublished color images.

Organized thematically, with texts by Colin Rhodes, The World According to Roger Ballen explores Ballen’s positioning within and connections to modern and contemporary art. The book is accompanied by a year-long exhibition at Halle Saint Pierre in Paris, which opened on September 7, 2019 and remains on view through July 31, 2020.

In her introduction, Martine Lusardy, director of Halle Saint Pierre and curator of Ballen’s exhibition at the museum writes: “Roger Ballen reigns over the black-and-white world of the human psyche. Disturbing, provocative and enigmatic, the work of this American-born South African photographer, expresses the sense of confusion of a man confronted by the nonsensical nature both of his life and of the world in general. Ballen’s work has been the subject of exhibitions at prestigious institutions for more than thirty years now. Although each of his shows is an event, his decision to exhibit at the Halle Saint Pierre in Paris, an atypical museum devoted to outsider art and unusual forms of creativity, demonstrates his freedom from artistic genres.”

In Chapter 4 in the book titled “Art Brut and the Raw Line,” Colin Rhodes writes about how Ballen’s drawings are central to the “Ballenesque” aesthetic. “Ballen never learnt how to draw, That is, he was neither taught drawing techniques nor did he seek to learn them. His mark-making was, and remains, spontaneous and impulsive. Indeed, his images carry a kind of primal force. They embody emotion and convey a general mood — at times sombre, at others fierce and demonic, and at others witty and mischievious. Although they are technically unsophisticated, there is nothing simple about the use to which he puts his drawings, nor indeed about their expressive concerns, which, for nearly two decades now, have formed the very basis of his aesthetic.”

Roger Ballen is one of the most important and distinctive art photographers working today. His previous books with Thames & Hudson include Asylum of the Birds, The Theatre of Apparitions, and Ballenesque. For more information, visit: www.rogerballen.com

Colin Rhodes is an art historian, curator, and educator. His previous books include Outsider Art and Primitivism, both published by Thames & Hudson in the acclaimed “World of Art” series.

THE WORLD ACCORDING TO ROGER BALLEN