The war of 1870 viewed by Adolphe Braun 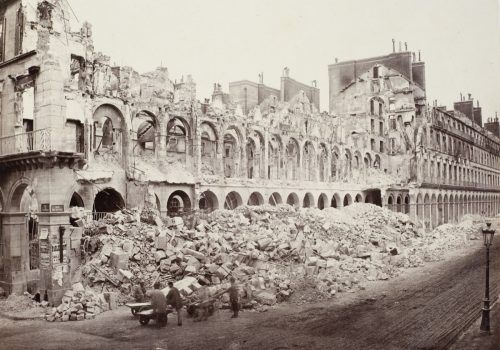 From February 17 to May 14, 2018, the Musée Unterlinden in Colmar (France) features a retrospective of the work of Adolphe Braun (1812–1877). Braun was among the most influential French photographers of the nineteenth century. Today, The Eye of Photography brings you his images of the Franco-Prussian war of 1870.

Some time before the Franco-German war broke out in 1870, the Braun Company set up a veritable factory in Dornach near Mulhouse. The factory continued to operate despite the annexation of Alsace by Germany and notwithstanding substantial, both material and financial losses. Always on the lookout for new opportunities, as soon as the war had ended in the spring of 1871, Braun dispatched his camera operators to the main battle sites. He published an album entitled Siège de Belfort, containing a dozen prints that bore witness to the aftermath of the battle and its impact on residential buildings, fortifications, and the town’s cathedral. The images of the streets at the foot of the citadel illustrate the violence of the last major battle of the war. The albums of the siege of Belfort varied in terms of the number and the choice of prints, but all included a view of the ruins of the Miotte tower. This ancient defensive structure at the edge of the wall became the main symbol of the city prior to the construction of the statute of the Lion of Belfort.

Using the stereoscopic format of up to 40 x 50 cm, the series Théâtre de la guerre included over a thousand views. In Strasbourg and the surrounding areas (Niederbronn, Reichshoffen, Bitche, Haguenau) Braun had to face competition from the local photographer Charles Winter (1821–1904) whose production enjoyed considerable popularity.

In Paris, the insurrection of the Commune between March and May 1871 led to street combat, executions, and fires. These tragic events were a frequent subject of wood engravings in illustrated magazines abroad. The press preferred engraving as an illustration technique due to the technical difficulties in reproducing photography. Photographs, however, could still reach a wide audience by providing illustrators with a model. At the same time, censorship would withdraw from circulation any photographs showing specific persons or events, such as portraits of Communards or images of the destruction of the Vendôme Column. Starting in June 1871, the streets of the capital were overrun by hordes of photographers who, like Adolphe Braun, saw a commercial opportunity in images of buildings destroyed by the Commune.

Paris train stations, bridges, and city squares appeared in 86 of Braun’s photographs, followed by 82 pictures of the suburbs, in particular the fortifications along the Thiers Wall (Rosny, Romainville, Ivry, Nogent, Choisy) destroyed by the German army. Thanks to its illustrious past as a royal and imperial residence, the Château de Saint-Cloud outside Paris came to epitomize wartime destruction. Occupied by Bavarian and Prussian troops, it was destroyed on October 13, 1870 by artillery fire during the battle of Bagneux. After the war, it became a privileged tourist destination: Parisians would come here on their Sunday walks, while the French from the provinces and above all the English visited the main sites of the siege of Paris. So that the visitors wouldn’t miss a single detail, street vendors would offer them binoculars or sell guides to the ruins published for the occasion. Braun took seven exterior shots and six pictures showing the vestiges of the interiors.

Braun’s photographic campaigns precisely followed the choice of ruins proposed by these guides as destinations of walking tours. The novel effect produced by the ruins would override the past importance of the buildings. Writers and photographers were fascinated by the buildings in the center of Paris, whose antique style lent the wreckage the allure of Roman or Greek ruins. The former Ministry of Finance, the Tuileries Palace, and the Hôtel de Ville were ideally suited to drawing a parallel with ancient architecture. The impression that the war had been raging just a short moment before was softened by the tendency to contemplative aesthetic experience akin to the proto-romanticism of the late eighteenth century. Adolphe Braun’s Théâtre de la guerre contributed to the change in the perception of the capital and to turning ruins into the symbol of the 1870 war and of the Commune.