The Getty Research Institute : At the Crossroads : Qandahar in Images and Empires 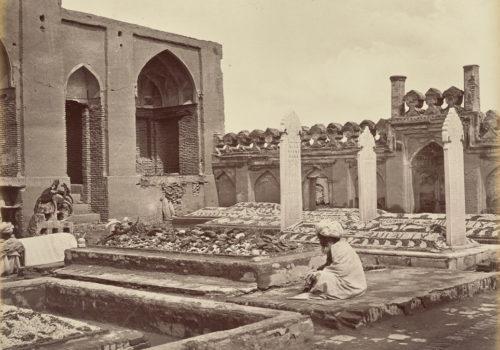 Getty‘s new Qandahar album website, At the Crossroads: Qandahar in Images and Empires, reveals complex history in photographs. The details of rare 19th century photographs are available online for the first time.

Qandahar, Afghanistan, has stood at the center of cultural convergence and conflict for over two millennia. In 1881, toward the end of the Second Anglo-Afghan War, a British military doctor took among the earliest photographs of the city. Over 140 years later, the collection of what is known as the Qandahar Album can be explored online for the first time through a new Getty website.

At the Crossroads: Qandahar in Images and Empires, a new digital experience from the Getty Research Institute (GRI), includes dozens of the album’s pictures, which feature important heritage sites, the architecture of the city, and its inhabitants, as well as explanatory text in English, Dari, and Pashto.

Situated at the intersection of ancient trade routes and surrounded by powerful Asian empires, it’s not surprising that walls nearly 30 feet thick and 30 feet high once framed Qandahar. Dr. Benjamin Simpson was a member of the British-Indian forces that controlled the city after defeating Ayub Khan, the governor of Herat, who attempted to rid Afghanistan of foreign intervention. Simpson’s intention was to document the region, key sites, and important players in the conflict.

“These photographs reveal the intrusions of the British occupation of Qandahar and speak to the resilience of a city and people caught between preserving their traditions and way of life and the inextricable forces of colonization and globalization,” said Aparna Kumar, lecturer in art and visual cultures of the Global South at University College London, in her essay about the photographs. “The album offers a crucial glimpse into the region’s past and endeavors to inspire further study on the history and culture of Afghanistan.”

Simpson photographed Qandahar against the backdrop of several key moments during the war. His images memorialize key sites of conflict, including the village of Deh-i-Khoja, the Baba Wali Pass, and Karez Hill. But the photographs served other purposes as well—for surveillance, military strategy, and as propaganda for the British at home, who could be simultaneously dazzled by the region’s beauty and supportive of its occupation.

“Simpson was no amateur photographer—his passion and knowledge of photographic chemistry may explain why he chose to transport hundreds of pounds of equipment to Qandahar when he was stationed there,” said Frances Terpak, senior curator at the Getty Research Institute. “He had a point of view when he created the album and wanted to tell a visual story of the conflict in a way that a British veteran might recount it, no matter how one-sided the recollection.”

At the Crossroads: Qandahar in Images and Empires
https://www.getty.edu/research/exhibitions_events/exhibitions/qandahar/index.html