The Dark and Pervasive Wanderings of Dimitris Kechris 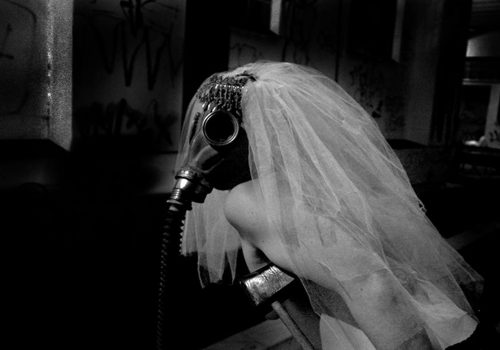 Dimitis Kechris is a Greek photographer in his thirties with degrees in physical science as well as photography from the Athens School of Fine Arts. Already exhibited in several of the capital’s museums and cultural institutes, he is also the cofounder of the artists’ collective Aldabaran, devoted to  photography. It is a place dedicated to various reflections on  photography and its history.

The series In Girum Imus Nocte, shown here, gathers photos taken in Greece, Italy, and Turkey. Dimitiris Kechris conjures this project as a wandering in the dark areas of instinct and thought in search of nakedness as a state of mind. He explains that he is trying to photograph the vicious cycle cadenced by the pain and the love driven by emotional role-playing. This series attempts to show in images the catastrophe coming from pleasures skewed by the trapping of masks. In fact, his work is tinted with a morose and tormented atmosphere without ever tipping into the lugubrious thanks to the delicate glint of the photographer’s eye.

Demitris Kechris grew up in Athens in an artistic environment where his creative unconscious was able to develop under the eroticism of George Bataille and Oscar Wilde, but also with the revolutionary impetus from the films of Godard and Bunuel. It was a universe that next lead him to the analytical work of Walker Evans and Diane Arbus. Photography came into his life as the medium he needed to understand how images connected him to other people. “Photography embodies my relationship with the notion of truth as well as its construction,” he explains. At the moment, he is also working on a project called Performing Life, inspired by methodological tools developed by artists Chris Marker and Allan Sekula.

Joséphine Faisant is an author specialized in photography. She lives and works in Athens, where she unearths local talents.