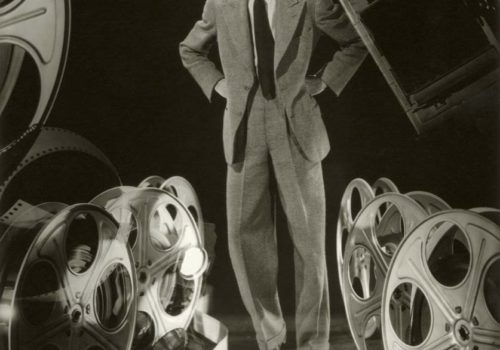 Ted Allan started his career very young as an actor and worked on a number of Cecil B De Mille movies in the early 1930s. When De Mille called on someone to take some portraits, Allan stepped forward and, on seeing the results, De Mille encouraged him to follow a photography career.

While still in his teens Allan opened a photographic concession in a dime store on Hollywood Boulevard, where he photographed many actors and aspiring movie stars. These pictures led to employment as a photographer for several large film studios including MGM. Allan took over Hurrell’s gallery at MGM, where his nickname was ‘Rembrandt’ – and stayed for four years until 1937. During those years he was Harlow’s primary portrait photographer. Allan also had a particularly good rapport with male stars. Unlike Hurrell and Bull, whose reputations rest with women, Allan brought an appealing masculinity to subjects as diverse as Robert Taylor, James Stewart and The Marx Brothers.

After MGM, he worked for several studios including Fox until he opened the Ted Allan Film Studio in 1952 and worked mainly on shooting documentaries and low budget feature films. But he never left photography behind and shot photos for many of Frank Sinatra’s films – Sinatra dubbed him “Farley Focus’ – and was one of the first to go into television, shooting stills for CBS Productions for a number of years.

Ted Allan is remembered as one of the best-liked studio photographers. He also had a reputation as a master printer and printed extensively from his and other photographers’ negatives for Kobal’s exhibitions and was respected for his superb darkroom technique.