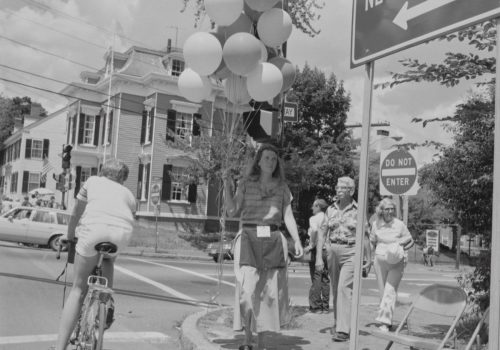 The Gallery Les Douches, in Paris, exhibits this discreet American photographer in Au fil du temps, until March 3, 2018. This work does not document the world but it speaks of his emotions, of his own life.

It is perhaps wrong to imagine Steven Rifkin as a calm, almost happy man, of extreme elegance and refinement. But this is obviously how we imagine him in light of his work. The title of this exhibit could easily have been The Sweet Life.

Rifkin takes us on a tour of a day-to-day America that changes almost in real-time, one that we have rarely seen. From the 1970s to the present day, Rifkin shows us an America of astounding purity. His inhabitants are photographed as so many actors in a silent musical, filmed in black and white. When they come in pairs, they are like the positive side of Diane Arbus’s characters. Rifkin does not belong to any tradition; he is his own tradition. As such, he tells the story of his own America, a peaceful America where Kennedy and Martin Luther King were never assassinated, an America that never experienced Vietnam, an America where Donald Trump never became president.

Yet this appearance of supreme gentleness owes as much to the quality of his prints as to their subjects. It is impossible to imagine Rifkin’s photos printed by anyone other than himself. They have the softness and mystery of sketches, so much so that one wonders whether they are prints or drawings. So it is hardly surprising to learn that Rifkin is also the official printer for a number of major photographers. And among these great photographers is Rifkin himself.

Olivier Beer is a screenwriter and novelist.