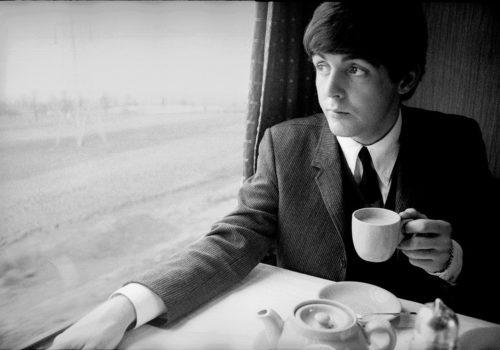 Photojournalist Harry Benson has been witness to a great many of the major political and social events in modern history. With an uncanny instinct for being in the right place at the right time, his unforgettable photographs have found their way into the national consciousness.

Benson was born in 1929 in Glasgow, Scotland.  His 1964 photographs of The Beatles propelled his career as he went on to capture American cultural and political history over more than 50 years.  Benson has photographed every president of the United States since Eisenhower, was just feet away from Robert Kennedy the night he was shot, was in the room with Richard Nixon when he resigned, stood alongside Coretta Scott King at her husband’s funeral, and was round the corner from the Twin Towers when the first plane hit on September 11 in New York City.  Benson was present at both the rise and fall of the Berlin Wall, and covered the I.R.A. hunger strikes, the Civil Rights protests across America, and the glitterati at Truman Capote’s famed “Black and White Ball” and at Studio 54 with equal aplomb.

Harry Benson has twice won the prestigious National Press Photographer Association’s Magazine Photographer of the Year award, first in 1981 and then in 1985. He has also been awarded the 2005 Lucie Award for Lifetime Achievement in Portrait Photography and the 2005 American Photo Award for Photography. In 2009, he was appointed a Commander of the Order of the British Empire by Her Majesty Queen Elizabeth II at Buckingham Palace and also received an Honorary Fellowship in the Royal Photographic Society.  In 2013, he received an Honorary Doctor of Letters from the University of St. Andrews in his home country of Scotland and in 2017 he received a Lifetime Achievement Award from the International Center of Photography in New York, where he now lives.

Benson has published 18 books of his work and has had over forty solo exhibitions of his photographs worldwide. His work is included in the permanent collection of the Smithsonian National Portrait Gallery in Washington, DC. and his photographs continue to be showcased in magazine and book publications worldwide.

In 2016, Magnolia Pictures released a feature-length documentary on Harry Benson titled “Harry Benson: Shoot First” and TIME magazine included his photograph of the Beatles “Pillowfight” on their list of the 100 Most Influential Images of All Time.  Most recently, the Addison Museum of Art in Andover, Massachusetts opened a solo exhibition of Benson’s work in September 2022.

Benson began photographing the Beatles in 1964 as they took the world by storm.  After the Beatles disbanded, Paul McCartney forged a new path creatively and personally.  From the Beatles, to the Wings, to touring across America, and to peaceful times with his then-wife Linda on their organic farm, Benson was afforded intimate access to McCartney and documented the evolution of him as an icon, performer, and a devoted family man.

“It all comes down to the Beatles’ music. You can’t get past it. I think John and Paul are the most important composers of the 20th century.”– Harry Benson