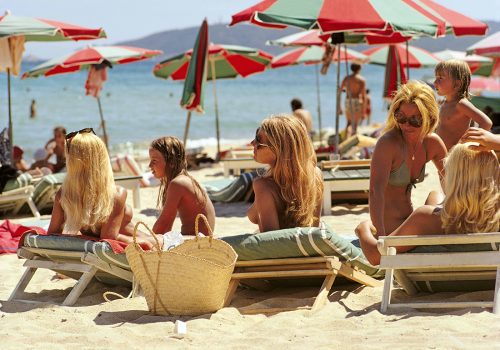 Synonymous with the art of traveling since 1854, Louis Vuitton continues to add titles to its series of books, Fashion Eye. Each book evokes a city, a region or a country, seen through the eyes of a fashion photographer.

Summer is vibrant, frivolous and joyful. Concurrent with the Saint-Tropez of Osma Harvilahti, Louis Vuitton Editions publishes in the Fashion Eye collection the book French Riviera by Slim Aarons. And the summers of the gentleman photographer want a perpetual party, where the bodies freed from fabrics crack on the flagstones while waiting for the night. The whole reflects a decade forging the symbolism of the Mediterranean dream, between inaccessible beauties and tourist charms. Our eyes today walk around enviously and slightly amused.

Saint-Tropez, Antibes, Saint-Jean-Cap-Ferrat, Monaco. The enumeration could extend to Porquerolles or Nice and arouse an imaginary used by the scandal photos of the glittery press. These cities arouse in turn a slight attraction and a distant look. They form a rigadoon of coasts where the Riva are bored, where the swimming pools are scheming vaporous loves and where men and women are crushed under the monotonous sun of the blue sky. On this line of built cities, there are paparazzis kept away and a photographer within.

Slim Aarons is from the same circle that he photographed. Born on October 29, 1916, George Allen Aarons debuted in photography with the Battle of Tone Cassino in 1944. The Allies lost more than 100,000 men and as soon as the war over, Aarons decided to move away from the blood, perpetual conflicts and the race for reporting and horror. The New York photographer went to the West Coast, Hollywood in particular, and the actresses attached to the arms of the moment. He frequented all the beautiful people, this “gentleman photographer” (Patrick Remy), and finally becomes one with the environment he integrated as a merit of his feats of arms. And when Europe opens to PanAm, Aarons continued his sweet life on the shores of the South of France, from palaces to villas. There is sadder comfort.

His eye tells scenes of exuberance, such as the elegance of Baron Enrico di Portanova in Monte Carlo, his Angelo jacket with cigar pockets; he photographed profusely lascivious postures, such as the coastal sailing of ​​the princely heirs; and his photographs describesat length the bodies without defects of actresses now forgotten by the sun and our world. More fun, and probably without real intention, the photographer also testifies to the exuberant construction of this Mediterranean coastline. Monaco already forms this carved rock of reinforced concrete. Saint-Tropez resists by his village, but its harbour is encumbered And Antibesis build up with villas; On the shores, hundreds of fleets give the illusion of breathing. The cities, without concert, thus began their transformation into a tourist circuit.

The final grace of this French Riviera by Slim Aarons is not so much the beauty of his photography. Others excel at it. Helmut Newton’s Monte Carlo found the vibration and mystery necessary for an architectural and erotic game. Aarons has more of the catalog of postcards, and if they make you dream, they also cause a detachment. The ensemble provokes an elegant movement, reflecting the joyful and light character of this era – now bygone – where to photograph was above all to seduce. No, the real grace of this book is the editorial choices made by Editions Louis Vuitton. Frédéric Bortolotti at the artistic direction and Frédérique Stietel at the graphic design deliver a silky and chic work. The choice of a slightly lacquered and glossy paper in reference to the paper used for advertising  of the old Harper’s Bazaar. The typography is reminiscent of the curves of the hippie years, and the legacy of this freedom in the Mediterranean idyll. Finally, the choice of full pages, without any margin, dazzles the eye with sun and bright colors. These choices follow the spirit of Aarons’ photographs. With this book, the Côte d’Azur does not saturate too much of its beauty.