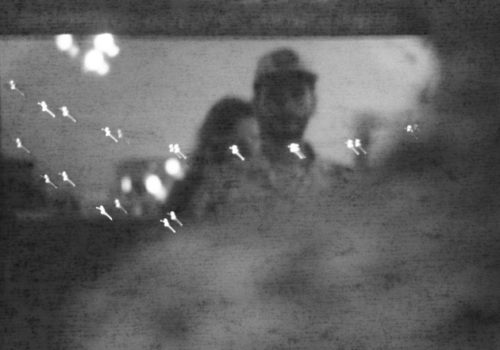 I remember a misty image of my childhood so distant and fragile that I do not know whether it is fantasy or reality. I was accompanying my uncle in the neighborhood where we lived. He went missing during the war and his body was eventually returned designated as a ‘Martyr’ after eleven years.

This collection was photographed using an Agfa Isolette camera on black and white film stock that had passed its expiry date. This model was first produced during WWII, and known as the ‘Soldiers’ Camera’. The expired negatives create enigmatic images, which also hide the soldiers’ identity. In fact, the soldiers all look the same, as their identity has disappeared in their uniform and their shared purpose to fight for the homeland.

The portraits are a combination of archival images of the Iran-Iraq war and photographs of the Martyrs’ Cemetery, printed on glass with the “Wet Collodion” technique; they are both fragile but immortal images. The video narrates the life during the war, a testimony of memories that do not return to be recounted in person. They are a reminder of a familiar story, that of no return and of missing. These images narrate forgotten stories, memories lost or permanently altered by war, and histories fading as we speak. It is an attempt to commemorate the many lives cut short and the way war alters us all. This work is an act of commemoration, treading a fine line between remembering and letting go.

Maryam Takhtkeshian was born in Tehran, Iran in 1984. She studied Photography at the Azad University, Tehran. Maryam works as a Still-photographer from 2005. She Also awarded Crystal Simorgh for Best Photo in the 35th and 38th Fajr Film Festivals. She also cooperates with different newspapers and magazines in Iran as a documentary photographer. Maryam is a member of Iranian society of still photographers (Khane-Cinema) form2009.

Maryam Takhtkeshian : No Soldier Has Returned From War