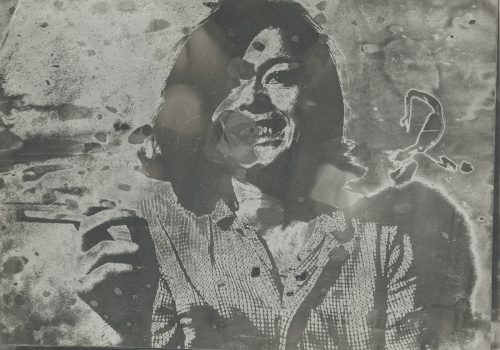 “My art is like a bush pruned by prejudice – despite it all we grow, even better. And not only do we proliferate upwards, but also downwards.” – Sigmar Polke

The 300 photographs from Georg Polke’s collection constitute  a cross section of Sigmar Polke’s photographic corpus,allowing us to measure the richness of the German artist’s iconographic universe between 1970 and 1986.

There is no hierarchy in these images in which “family” photos, self-portraits taken with associates and accomplices, snapshots, documents destined to be worked on visually, graphic and chemical experiments, travel snaps, as well as pictures made under the influence of drugs are all brought together… Polke mixed up taxonomies, classifications and the sacred oppositions: documentary and fiction, archives and personal mythology, art and advertising, amateur and professional, experimental and popular…

Polke used the photographic medium early on, as both a documentary source for his paintings and as a means in itself. There is a reciprocal contamination of the two practices in Polke’s work, so much so that it is just as possible to evoke the photographic dimension of his painting as it is to speak of the pictorial dimension of his photography. His approach to photography was, from the beginning, that of an amateur craftsman. Polke always developed and printed his photographs himself, irrespective of the rules (not heeding to correct times of exposure and using out-of-date paper and chemicals), flippantly practising under- and over-exposure as well as double-exposure.

Polke had a thirst for pictures, all sorts of pictures. He paid close attention to their grandeur along with their weaknesses, assuming the right to manipulate or even abuse them, to make them yield what they possess in their deepest folds, textures and significations. Everything in it is susceptible to being covered over, diluted, oxidized, stained, polluted, corrupted or poisoned…

Sigmar Polke’s work revolves around the pleasure of grasping whatever happens and being on the lookout for what occurs in a process of events, wanting accidents to happen.

There is a paradox in Polke’s usage of this medium: finding an equivalent of the processes at play between painting and photography that is not in the domain of mimesis, as it is in Gerhard Richter’s painting or in Jeff Wall’s photography. There is a reciprocal contamination of the two practices in Polke’s work, so much so that it is just as possible to evoke the photographic dimension of his painting as it is to speak of the pictorial dimension of his photography. In fact, there was no difference in “nature”, for Polke, between drawing, photography and painting.

In the same manner, his photographs cannot be reduced to a “style”. Indeed, they even abolish the notion of style with confounding jubilation and enthusiasm. Through their heterogeneity, they occupy the whole span of photographic thought. Everything happens as if Polke had undermined from the inside all the important modern and contemporary regimes of the image: from post-Bauhaus formalism to the documentary approach of Walker Evans or August Sander, from counter-cultural aesthetics (Fluxus, Punk, “trash”) to the humanist tradition of Henri Cartier-Bresson.

Painting contaminated by photography, photography poisoned by painting: Polke’s art is contained in this toggle switch. Polke’s photographic infamies are in this regard exemplary of an aesthetic and ethical position that is profoundly libertarian. Polke did not try to “save” painting by photography, or to ennoble photography by painting, following a rather stale notion of contemporary rhetoric. On the contrary, he amplified the two enemy sisters’ bad reputations.

The 300 vintage prints on view come from the personal collection of Georg Polke.

The exhibition is organized in collaborations with the Morsbroich Museum.

A book is published by LE BAL.

On the occasion of the exhibition, two study evenings led by Bernard Marcadé are organized to question Sigmar Polke’s irreverent and jubilant relationship with the photographic medium.

SIGMAR POLKE, born in Silesia in 1941 and died in Cologne in 2010, is one of the most influential artists of the post-war period.

Irreverent towards traditional techniques and materials, Sigmar Polke develops an experimental approach of art in which a wide variety of styles and subjects are used for social, political and aesthetic criticism. His protean work can be linked to “a battlefield where dangerous materials and subjects confront each other”. (Bernard Marcadé)

After a brief apprenticeship with a master glassmaker in Düsseldorf in the late 1950’s, Sigmar Polke continued his studies in painting at the Staatliche Kunstakademie in Düsseldorf. While still a student, he founded the “capitalist realism” movement in 1963 with Gerhard Richter and Konrad Fischer-Lueg. By diverting the codes of advertising image in counterpoint to American Pop Art, they wish to provide an answer to the nationalist themes of socialist realism which is developing in East Germany while at the same time making a sharp criticism of a booming consumer society.

Sigmar Polke has also participated in many international biennials, including the São Paulo Biennale and the Venice Biennale. He has received numerous awards, including the Golden Lion for his solo presentation at the West German Pavilion in 1986, the Infinity Awards from the ICP, New York, the Carnegie Prize (1995), the Praemium Imperiale (2002) and the Roswitha Haftmann-Preis (2010).