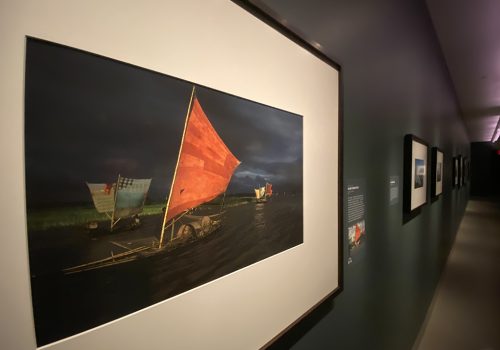 Shahidul Alam, has been, for 40 years, an activist, fighting for the rights of workers and oppressed peoples, with a camera – a lens-based technology in Alam’s hands is a powerful weapon of deployment. He deploys it to document and try to correct the wrongs he sees around him. After starting out to be a research scientist, his life took a fortuitous turn. He purchased a camera for a friend, who could not pay him, so Alam started using it. With this camera he became a witness of how corrupt governments and companies crush people under their misguided beliefs.

On 5 August of 2018 the Bangladesh government of the 4 term Prime Minister Sheikh Hasina, arrested Alam for what they said were “false” and “provocative” statements given in an interview with Al Jazeera about student protesting the high pedestrian death rate on the streets of Dhaka. Words that angered the ruling party with their truthful criticism. Shahidul Alam was taken away from his home at night, locked up and torture until International and local pressure forced his release on the 20th of November. For 107 days without a camera, inside, he never stopped campaigning for the people’s human rights – like his fellow prisoners. He mobilized them to take the lead, making dozens of murals inside the prison, including one of his prized photos of fishing boats sailing on the Brahmaputra River.

Truth to Power, the title of his exhibition at the Rubin Museum in Manhattan, New York City, is on display until May 4th, 2020. This exhibition documents 40 years of Alam’s visionary camera Art, made around the globe as the activist restlessly, with great energy, revealing the Truth that confronts the abusive Powers of his native Bangladesh and other countries. From his earliest photos of demonstrations by workers and refugees on the move in the 1980s, to portraits and images of Bangladesh’s breathtaking beauty. Alam has steadfastly revealed his peoples struggle and pride. Alam observes Bangladesh as an insider, where he has been a citizen witness for forty years, not as a visitor from the outside.

One poignant section presents his chilling photos of mud-crusted slippers and pieces of fabric – all that is left after a young activist Kalpana Chakma was abducted by the military in the middle of the night from her Chittagong Hill Tracts and disappeared, never to be seen again.

Alam, is also a teacher of photography, 24 of the 26 faculty members at the school of photography, Pathshala, setup by Alam, were former students of the school. A testament to them and their mentor. They work to spread their documents around the world in support of human rights and against repressive governments, companies and bosses.

As this same time he has published with Steidl, a book of his life as activist photographer: The Tide Will Turn, in which, he recounts all his journeys and challenges. On the opening pages of the book he quotes the great activist writer Arundhati Roy:

“I believe the tide will turn. It will. It must. This foolish, shortsighted cruelty will give way to something kinder and more visionary. This particular malaise, this bout of ill health that has engulfed our planet will pass.”

This applies to the United States as well. Let’s hope that Shahidul Alam and others by showing the Truth will turn the tide and return us to a gentler, more compassionate world.