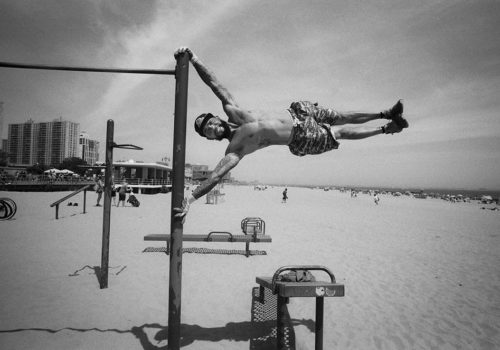 “I make books because I have stories to tell and want to share some of my visions; because I am passionate about a subject and want to explore it over a long time period with my camera. I do a book because I have to, because I wish to add my voice and viewpoint to the conversation. Might I say that I do a book to change people a little, and to think about and perhaps experience the world a little more fully.” —Harvey Stein

Widely celebrated New York street photographer Harvey Stein is known, in part, for his ability to notice the beautiful, mundane, quirky aspects of human nature and caught moments and in doing so, elevate the everyday to a space of wonder. Coney Island People 50 Years (Schiffer, July 26, 2022) traces Stein’s love affair with Coney Island over time with a collection of 174 evocative black and white photographs spanning 1970 to 2020 that focus on the people who populate this legendary place. It’s his third book about Coney. The first was published by W.W. Norton in 1998 and simply called Coney Island. The second, the acclaimed Coney Island 40 Years, was published in 2011, also by Schiffer. Twenty-three of Stein’s favorite images from the 40 year book are included in the new work.

Coney Island is located in the New York borough of Brooklyn and has established itself as a cultural phenomenon for over a century. At one point around the turn of the twentieth century it had three competing theme parks. Today, it is estimated that over 5 million people visit annually.

Over the past 50 years, Stein estimates he has visited to photograph Coney Island over 600 times. The photographs in his new book are augmented by the context provided through the inclusion of a historical timeline of Coney Island written by the former Brooklyn Borough historian, John Manbeck, and Stein; several essays; and excerpts from interviews Stein conducted with Dennis Vourderis, co-owner of the world-famous Wonder Wheel at Coney Island; and Dennis Thomas, the long-time president of the 119-year-old Coney Polar Bear Swim Club. Together all these elements combine to create a book that is a comprehensive intellectually panoramic look at this unique cultural institution from a variety of visual and conceptual perspectives.

Gallery owner and photography historian Alan Klotz contributed an essay for the book and he writes, “Make no mistake about it, Coney Island is a theater—always was—and there is no shortage of fascinating actors here . . . and that’s where Harvey Stein comes in.” Stein is drawn to people and gesture and expression and how authentic humanity reveals the most about the spirit of a place, and perhaps about life itself. Klotz continues, “Stein shows us that there is a Coney Island continuity that maintains itself through all this . . . that the place is greater than the forces molding it. Its denizens are the ones projecting its aura.”

In her essay for the book, Virginia Hines notes that the truth of Stein’s images, and really any authentically-created art, is in their ability to provide an inward path to look at oneself, by what is shown through others. She writes, “Finally, an admonition: should you contemplate Harvey Stein’s pictures of Coney Island and find them exotic or outré, look again. Few things are stranger than an unexpected glimpse of oneself in a mirror.”

Coney Island is an American icon, a fantasyland of the past with an evolving present and an irrepressible optimism about its future. It is a democratic place where people of all walks of life and identities are brought together, and that is much of its appeal. There is no other photo book that has been published which documents a 50-year time period of a famous location taken by one photographer. Being in Coney Island is Harvey Stein’s invitation to step into another society, rather than just experiencing a day’s entertainment, and he brings it to us in all its glory in this remarkable book.

Harvey Stein is based in New York City. He currently teaches at the International Center of Photography. He has also been a member of the faculty of the School of Visual Arts, New School University, Drew University, Rochester Institute of Technology, and the University of Bridgeport. Stein has nine previously published photography books: Parallels: A Look at Twins, E.P. Dutton (1978); Artists Observed, Harry Abrams, Inc. (1986); Coney Island, W.W. Norton, Inc. (1998); Movimento: Glimpses of Italian Street Life, Gangemi Editore, Rome (2006); Coney Island 40 Years, Schiffer Publishing, (2011); Harlem Street Portraits, Schiffer Publishing (2013); Briefly Seen New York Street Life, Schiffer Publishing (2015), and Mexico Between Life and Death, Kehrer Verlag (Germany, 2018); Then and There: Mardi Gras 1979, Zatara Press (2020). His photographs have been widely exhibited in the United States and Europe—89 one-person and more than 165 group shows to date. His photographs are in 58 permanent collections, including the George Eastman Museum; Bibliotheque Nationale; the Art Institute of Chicago; and the Museum of Fine Arts, Houston, among others. Stein’s photographs are represented by Sous Les Etoiles Gallery, New York City. Some of Stein’s work can be seen on his website, www.harveysteinphoto.com and on Instagram @stein.harvey.

Margarita Mavromichalis has spent her life living and traveling all over the world. She speaks five languages and studied translation and interpreting. She likes to think that photography is her second language, as it’s a universal language, one that is understood by all across the world and that it conveys messages and stories in the most powerful way. Margarita is mostly attracted to street photography and the elements that evoke emotions and surprise in our every-day life. She is passionate about documenting current events that she feels very strongly about, highlighting their social impact. Her work has been exhibited in New York, Boston, and San Diego and most recently in Budapest, Athens, Paris, Berlin, Barcelona, London and Paris. View Margarita’s work at www.margaritamavromichalis.com and on Instagram @tita_mavro.

Alan Klotz is the owner of Alan Klotz Gallery in Manhattan, New York New York. The gallery is in its 45th year of operation, specializing in both vintage and contemporary photography. In addition to his career as a photographic art dealer, he has taught history and criticism of photography since 1991 in graduate fine arts programs.

Virginia Hines has had articles published in The New York Times and New Orleans Times-Picayune and has edited several books. Her photographs have been exhibited in galleries in the US and Europe and have appeared in numerous publications. Currently she writes for Street Photography Magazine.

John Manbeck is the author/editor of nine books on the history, culture, and people of Brooklyn, New York. He was the official Brooklyn Borough Historian from 1993 to 2002. In addition, he taught English and Journalism at Kingsborough Community College in Brooklyn for 32 years. His weekly column, “Historically Speaking,” appeared in print and online in the Brooklyn Daily Eaglefrom 2003 until 2012.