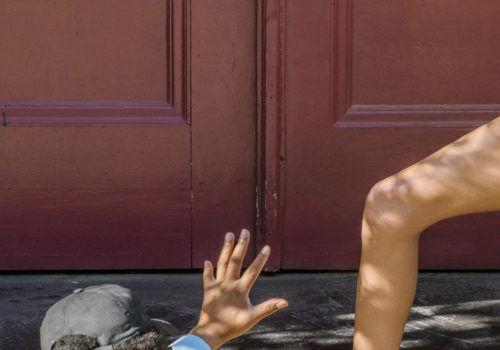 Robert Klein Gallery presents a new series of color photographs by New York City–based photographer Arne Svenson titled “A Beautiful Day”. Featuring images taken by Svenson from his apartment windows in Tribeca during the height of Covid-19 lockdowns, the exhibition is available online and in-person at Robert Klein Gallery from January 15 – March 18.

Whether he is photographing sock monkeys, expansive landscapes, or unaware New Yorkers, photographer Arne Svenson looks beyond his subjects to seek out universal truths in the images he captures.

The works on view in “A Beautiful Day” are a natural continuation of Svenson’s controversial series “The Neighbors”, in which he photographed residents of a floor-to-ceiling glass apartment through their windows. Although their identities were obscured—“I was not photographing these subjects as specific, identifiable personages, but more as representations of humankind, of all of us” Svenson said—the opening of the show at Julie Saul Gallery in 2013 came with a lawsuit against Svenson that claimed invasion of privacy among other charges.

Svenson fought these claims later that year and again in 2015: “Defending myself against these charges was one of the greatest challenges of my life, but given censorship as the alternative, I had no choice,” he said.

Now in “A Beautiful Day,” Svenson’s vantage point is the same, but his lens is focused elsewhere: Through two windows, one facing North and one facing West in his Tribeca studio.

Although he hadn’t planned to continue focusing his lens on anonymous subjects, the onset of Covid-19 made the project “a necessity” for him. Not many passersby came through the neighborhood during city-wide mandates to stay at home, but for this reason exactly, the visual stories told by those Svenson photographed are compelling. A man walks by reading a thick book; someone pauses to snap a picture of a tree blooming with white flowers; a pair of stick-thin legs pause in a ballet class-ready first position.

Of both series, Svenson emphasizes, “My aim remains the same: to capture those seemingly banal behaviors in which we all engage and to reveal the wonder, mystery, and beauty of them.”