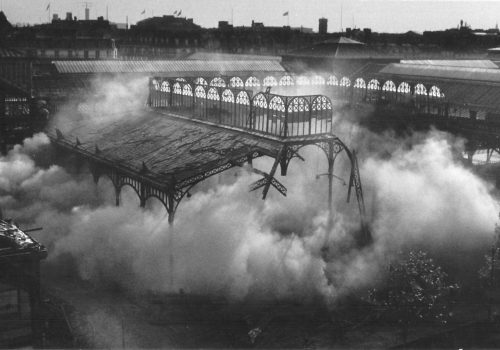 Jean Claude Gautrand who passed away on September 23, 2019, was a talented photographer and major author, he remains the witness of a generation which has never ceased to campaign for the recognition of photography. Tireless group leader, exhibition organizer, author of some thirty books on photographers: Brassaï, Doisneau, Ronis or on the history of this art – Bayard, Blanquart – Evrard.

Above all, he was a photographer who, from the start and his encounter with Otto Steinert’s “Subjektive Fotografie”, developed a real poetry through the image where graphics, material and lights are the essential components of the formal rigor which structures all his work. His series of photographs, set of images on the same subject, create a sort of poem or speech in which the motif is expressed in all its fullness and complexity. An original approach for the time that he applied from 1964 with his first major series Métalopolis.

His photographs mainly illustrate an interior approach based on the problem of time, memory, and disappearance. An unambiguous discourse that is based on images in the subtle prints that he created himself.

In 1968, Jean Claude Gautrand received the Grand Prix of the city of Marseille at the Cantini Museum. It is there that he met the members of the jury, including Denis Brihat, Lucien Clergue, Robert Doisneau and Jean-Pierre Sudre who will become his friends. This exhibition is a nod to this first recognition.

More than a hundred photographs, from 1955 to the present day, will be exhibited in the vast gallery at Maupetit. Powerful black-and-white photos that bear witness to urban or social upheavals (Métalopolis, L’Assassinat de Baltard, Bercy, les Mines), the tragic history and barbarism of men (Les fortresses du dérisoire, Oradour, Le camp de Struthof), and ecological disasters (Red mud, Lake Vassivière).There is also a more poetic series like Le galet or another unpublished series on Nudes, chiseled by light. Finally, it is a daily Paris that is transformed, taken during walks thru Paris. And then, with black and white, color is mixed; with his latest series Le Jardin de mon père, it is a veritable gallery of paintings offered by Jean-Claude Gautrand, and a delicate and emotional look at the ephemeral and the passing of time …

This exhibition, programmed with him, will be accompanied by his last two books Itinerary of a Photographer (Bourgeno editions) and Le Jardin de mon père * (Photo # graphie editions).

It was time to recognize the one who had long stood aside in front of his peers and to highlight the work of this great humanist with a rigorous and benevolent gaze.