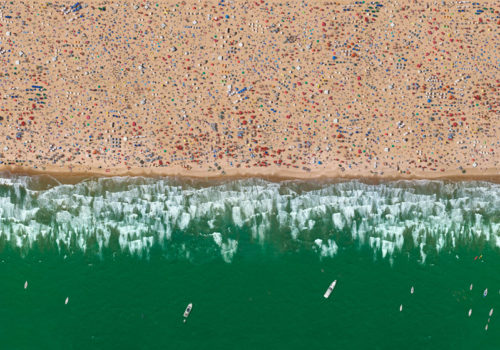 In a great deal of your work, you use aerial photography.  How did you come about making this type of photography?

I began shooting aerial views around twenty years ago, when I got my helicopter pilot’s license.  For me, the act of making aerial photography represented the combination of two dreams, because, in addition to always  wanting to fly, I dreamed of being a photographer.  At first, I was taking aerial shots more so for commercial work, but I always took advantage of the flights I was sent on and took some photos for myself.  Then I started to take helicopter flights solely to photograph that which interested me.

What exactly are the themes that interest you, and what vision of the world do you want to give through the aerial views you’re constructing from the combination of your photographs taken in the air?

After several years of flying in a helicopter, I started having a different perception of the world, started seeing a lot of things that one doesn’t necessarily see from the ground.  For example, the fact that the world’s biggest cities are completely surrounded by an unbelievable quantity of junk yards and cars  scraps.  A lot of waste produced by humans is very difficult to recycle or get rid of; today, we’re not able to process all that we produce, which we do in frightening proportions.  What I’m trying to show in my work is this accumulation produced by humanity, the excess that it generates to continue to maintain a certain lifestyle, to live with a certain degree of comfort.  In making these montages from my aerial shots, I’m creating photos of piles of cars, of abandoned airplanes, of fruit trucks, of crowded beaches…

Last November, you released your book Aeroporto, which was made from a single image.  Can you tell us the story behind this image?

One of the themes that particularly interested me when I was taking aerial shots was the airports.  As soon as I started flying over them, I consistently photographed the airplanes.  I would take the shots from a 90 degree angle, exactly like the images produced by satellites.  So, I started to have a large “collection” of photos of planes from different companies, as well as photos of all types of airport equipment. From this material that I started  assembling,  I constructed Aeroporto, which is a single image.  I took a year to make this image.  After having photographed several airports, their equipment and planes from the sky, it was necessary to think of and develop a map of a fictitious airport that I was going to construct, then put all of that up digitally; a step which took 800 hours of work on the computer…

How was the idea to make a book from this photograph born, and how did you think of the form that this monumental image (the original print measuring five meters long) was going to take in this book?

The Aeroporto photograph is a work very rich in detail, since it’s made from close to one thousand photographs assembled together.  It is, thus, necessary to show it in a large format so that it would be seen in all its scale and that all the details would be visible.  If the image had been reduced to the size of a page of a book, we were going to lose not only all the detail, but also the scale of the work.  So, we decided with the editor and the designer of the book to keep the scale and to split up the image while following a precise division to transpose it in the form of the book.  These divisions are done in such a meticulous manner that it is possible (which, of course, involves destroying the book) to piece together on the wall a photograph three meters long; a scale similar to that which I originally conceived for this image.

What are you working on at the moment, or what are your future projects?

At the moment, I’m working on Brazilian forests.  To create my images, I’m drawing my inspiration from European artists who came to Brazil in the 19th century who were in charge of representing Brazil within the framework of artistic missions.  They used painting, at the dawn of the birth of photography, and restored the exuberance of the tropical forest which they discovered at that time, and of which they had no visual reference.  Two hundred years after these representations produced by a foreign eye, I’m trying, in addressing the same subject matter, to find the pictorial aspect of their images, all while using current technology.  I photograph and then treat my images in such a manner that the rendering calls to mind lithographs from that time.  Finally, I’m focusing on territories that are still intact, on nature that is still virgin. It’s almost a return to origins, a work of purification after all these years working on humanity’s excess.