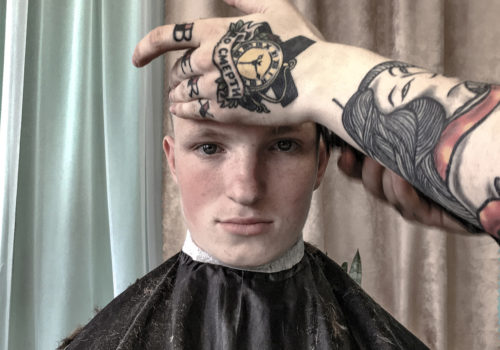 Dmitry Markov (1982) is a Russian photographer. His iPhone pictures are icons of ordinary people’s lives in small-town Russia. He lives and works in Pskov, in the East of the country, near the Estonian border.

Dmitry has a passion for documentary photography, on the fringe of journalism. His images are captivatingly truthful, a raw testimony to a peripheral society without many prospects. He shows the reality of the social outcasts, characters whom he cares for dearly.

Yet in Russia, social content work is often frowned upon. “When people ask me why I take pictures of the dark side of life, I answer: because I’m part of it”.

In February 2021, as he was protesting in front of the Moscow municipal courtroom where Russian activist Alexeï Navalny was standing trial, Dmitry Markov was arrested. While he was in custody, he took a picture for his Instagram page that went viral.

In partnership with the Anna Nova gallery in Saint Petersburg, Reflexivité(s) exhibited DOUCHA, a selection from Dmitry Markov’s latest work.

“I remember some episodes with a smile, like having to listen to Pink Floyd that my father forced on me when he was drunk. He had no particular connection to the music – he was just a worker, after all – but it was very important for him to shape my musical priorities, the earlier the better – when I was around seven or eight years old. I especially remember Money from the Dark Side of the Moon album. I remember the stool, and the foreign-made cassette player on it, my small head at speaker height and my father shouting, louder than Gilmour, over my head: – Do you hear the stereo? The Stereo!
– Yes ! (Teers in my eyes)
-Stop howling! Get your shit out of your head! Can you hear the box in the left speaker? Can you hear the coins fall? – Yes! (Teers in my eyes).
I think that back then, without knowing it, my Dad imprinted this good principle in me – art and pain go hand in hand.”

KIRIL SEREBRENNIKOV, Russian filmmaker and director, whose films have been screened in Cannes and Avignon, offer his words to the photographer he elevates to the status of a Russian “Cartier-Bresson” and affectionately nicknames him Dima, “The enchanted pilgrim”.