Psalms of Shadows by Roger Ballen and Gabriele Tinti 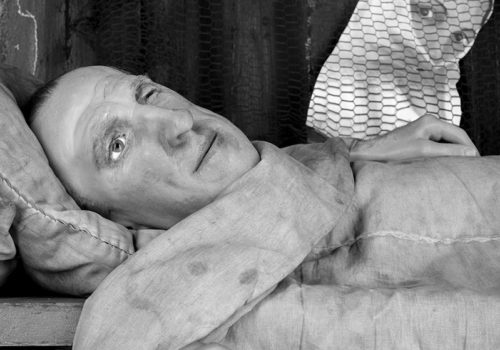 The artist-photographer, who lives and works in South Africa, asked the Italian poet to make his images sing in a book called The earth will come to laugh and feast.

As you turn the pages of this book, you seem to have entered the house of the god of the dead himself and  to pass from room to room in his dark palace, meeting on your way the irreducible pain of the world visiblexith wings prevented from beating by the barbed wire of our human curse.

In this mournful land, however, a noise soars, like a whisper that never ceases to moan like a muddy torrent, sometimes in a desolate complaint, sometimes in an obscure confession, and sometimes still in a startling cry.  These are the voices that the poet Gabriele Tinti managed to bring out of the photographs of Roger Ballen taken between 1995 and 2017, revealing through words the expression of various spirits fixed in these bewitched compositions and producing a form of lugubrious orphic and abysmal ode.

Little by little, as we listen to these lamentations, coming from a dark mystery, from more or less serious disturbances of health physical and mental, from a handicap of living with a condition that is always too miserable and too limited, from the violence of a body subjected to its impulses for life and death, its too great clairvoyance of the beyond or the weight of the inheritance which marks like the hot iron that was formerly applied to the skin of the serf or of the galley slave …

These voices begin with that of the “prophet of madness” who lost his left eye and which an unknown hand has recovered.

They end with the death of a hanged man whose bare feet we see only suspended in the air and whose last meal consists of an apple cut in two oxidizing being exposed to the open air and which will remain as the very sad trace of a being who decided to leave life on his own.

In the middle, everywhere, shrill voices praising their seclusion and seeking on the sidewalk of the world the debris of their shattered dreams. “The shade is my home, my refuge.” someone proclaims. “Perhaps it’s best to step aside, to find a way to sleep.” “How hard it is to act calm / When you think the sky is about to fall” it is written next to the photograph of a child wearing a mask askew that hide his view as he opens his mouth in amazement or as if the monster he was seeing was escaping from his sight.  “An inexorable fire roars inside me”, warns yet another.

They all seem to be those moths attracted to a light bulb that they find themselves in love with and yet will be fatal to them. All, as if advancing in the anteroom of limbo like wandering and penitent souls, and which make one think of these two ending verses The Albatross by Charles Baudelaire: “Exiled on the ground in the midst of jeers / His giant wings keep him from walking “.

When turning away from the book, we then have the impression of being also this prevented volatile, sometimes aspiring to join the celestial world and nodding to these words of the poet Tinti: “Always be ready to fall and to bleed ”. And then :

“Your words are your swords”.

The earth will come to laugh and feast