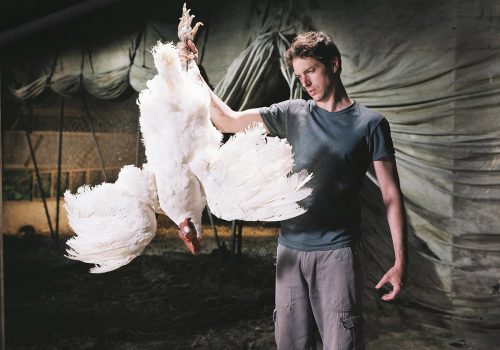 Praz-Delavallade presents “FOCUS”, a new series of artist portraits to give insight into their artistic practices.

Adi Nes plans and constructs each one of his images like a film director with shrewd and meticulous stage-work, based on direct references to well-known works from art history. This staging involves an iconographic and theoretical re-interpretation of original subjects, which are transposed into a contemporary setting and environment. The goal is to reflect the moment which encapsulates the whole action. The images seem to waver between pose and action. What is distinctive about Adi Nes is the intelligence he applies in juxtaposing the intensity of the film image with classical compositions drawn from the history of painting, to photographs which reveal us a critical eye on his time.

“The creative process is one full of wonder which evolves in the deepest and most intimate parts of the artist’s soul. The spark which ignites a creative moment sometimes occurs in a flash of inspiration, while at other times is the product of hard, Sisyphean work. My style of work is akin to film making. Most of the time I begin a new series of photographs by extensively researching numerous sources of visual information such as art history, the history of photography, reservoirs of internet images, textual research of literature, films and more.”

“The view of the photographer is usually the view of the outsider — the person who looks at things from the side. This is the way I look at things also by virtue of my biography: as a homosexual, who grew up in the periphery, from a middle-class Sephardic family. The central theme of my work is that of identity. While Sephardic Jews are not a minority in Israel, for many years they were thought of as such. Minority groups usually deal with their identities. By the way, adolescent boys and soldiers are at the age when a lot of questions of identity are asked which is why I chose them as subjects in previous series.”

Adi Nes (born in Kiryat-Gat, Israel in 1966) lives and works in Tel Aviv. He has had solo shows at the Barbican Art Center, London; Eretz Museum, Tel Aviv; Contemporary Jewish Museum, San Francisco; the Wexner Center for the Arts, Columbus; the Tel Aviv Museum of Art, Israel; or the Museum of Contemporary Art, San Diego amongst others. Adi Nes’ work is in many public collections including the Corcoran Gallery of Art, Washington, DC; the Montreal Museum of Fine Arts, Canada; The Jewish Museum, New York; the Tel Aviv Museum of Art, Israel and The Israel Museum, Jerusalem, as well as major Foundations and private collections.