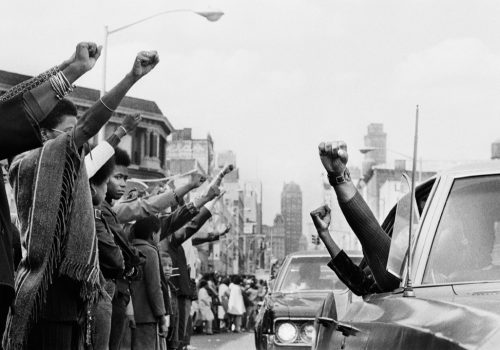 On the morning of 19th September, after a day of seemingly endless rain that wasn’t enough to cool the ardor of the curators and their assistants in their last minutes picture hanging  , always chaotic – a habit at Pingyao, the blue sky returned. The 16th edition of the Pingyao International Photography Festival could open in front of an audience of dignitaries ranging from party apparatchiks (from the province, from the canton, from the city) to eminent if not influential members of the Chinese National Photographers’ Association.

After the heroic trumpet piece from George Lucas’ “Star Wars” film, the host announced the name (mispronounced) of Jean-Pierre Laffont, the Festival’s “Star” climbed the red carpet covered steps, under the amused eye of Eliane Laffont, his faithful companion on his long march, and guided by a hostess dressed in a traditional, white cheongsam, slit on the model’s long legs, paired with white stiletto heels. In a strong, assured voice, Jean Pierre made his speech in English, worthy of a professional candidate in the American presidential elections.

The honors done, the reality of Chinese photography was disillusioned just as quickly: Jean-Pierre and Eliane had the unpleasant surprise of seeing twenty-two prints at their big exhibition in the main Diesel factory site taken down from the walls as instructed by an order on red letterhead from the censorship office of the Ministry of Culture in Beijing, sent to the provincial level then to the canton level and finally carried out by an official from Pingyao who came to see for himself the removal of the recriminatory images.

I learnt later that a party dignitary, a veteran of the revolution, came to see the Laffont exhibition and he (or she) was indignant at the images later judged offensive. The Laffonts fell from their pedestal, or even from the ‘paradise” of the place of honour (like in Eurovision as Jean-Pierre says), the fall to earth – very dusty in the Diesel Factory – hurt a little. But there was little that could be done, the system is that these three areas remain as sensitive as ever in China: sexuality (nudity), religion, ethnic or regional minorities. The operation was done twice, as Eliane said: the exhibition became a “Shrinking Show”.

But with intelligence and patience she rearranged the display to cover the “holes” left on the walls and obtained a TV screen to show the disgraced images in a loop. It has to be said that Eliane Laffont’s resourceful staging by dividing the exhibition gallery into an antechamber and a back-room did justice to the modernity and the classicism of Jean-Pierre Laffont. The classicism is primarily in the work on the American farmers that evokes the humanist documentary of the FSA series of the 1930s. The modernism of Jean-Pierre’s fashion and rock absolutely explodes on kinds of quadriptychs on the end walls with eccentric, depleted dandies, caught paparazzi –style, going to the Mohammed Ali versus Joe Frazier fight at Madison Square Garden.

Let’s return to the censored photos: one from May 1970 at the time of the protest against the massacre of students at Kent State University showing a boy squirting water with his willie out, into the lake at the Washington Monument. The colour photo of two men, medals round their necks, kissing open-mouthed during the first gay Olympic Games in San Francisco in August 1982. While there are other prints showing naked breasts and bare bottoms, the series on transvestites in New York doesn’t seem to have disturbed the censors particularly. On the subject of religion, the entire series on Guru Bagwan Rajneesh’s community in Oregon in 1984 was not judged worthy of Pingyao. What appears still more incomprehensible to us is the censoring of the complete reportage on Mexican migrants on the borders with California and Texas. What have the censors seen in this as subversive?

Ironically, the photo of a pro Vietnam-war protester in New York in 1966 where you can see a placard with the words: “The only good communist is a dead communist” remained on display!

Censorship apart, the presence of Jean-Pierre Laffont’s ground-breaking exhibition is a breath of healthy air in the midst of the mountains of right-thinking Chinese photographers whose titles hang on too often to the “China Dream” of official propaganda. Jean-Pierre Laffont’s lecture that he gave to a packed hall is strong evidence of the thirst for direction among the disorientated young Chinese photographers who listened to the pieces of advice from this legendary French photographer – now naturalised American, shown on the large exhibition poster as ”The Legendary Photographer”, who replied to a question about digital photography: “Reality is what I see in front of me. If I take a digital photograph, I correct the brightness and the contrast, that’s fine, but if I add to it with more and more Photoshop effects, I distance myself completely from reality, More and more that’s not what I saw in front of me.

Jean-Pierre who came to China in the 1980s to document the last remains of the Long March, is amazed at the incredible changes in the Middle Kingdom,  from where it’s hard to imagine today how he could document the downfall of a president, the minority movements such as the Black Panthers and women’s lib, student protests, the hippies and the Hare Krishnas, gay pride and the prisons whose portrait is the infamous electric chair at Sing-Sing, the national flag, hung upside down as a sign of rebellion…,etc. Is the reality of  China today really what you see in front of you?

Turbulent America, by Jean-Pierre Laffont
At the Festival of Pingyao, Chine
19 to 25 Septembre 2016
http://www.pip919.com/