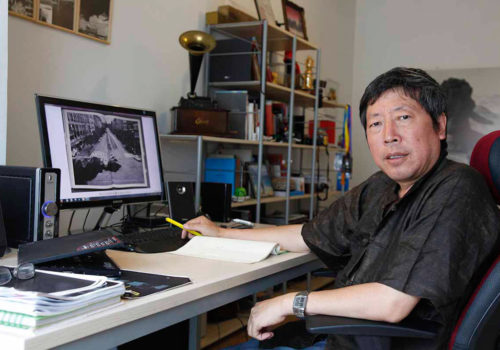 On Friday 19th September, the 14th edition of the Pingyao International Photography Festival opens in this UNESCO world heritage city in China’s Shanxi Province with 400 exhibitions featuring more than 2100 photographers and thousands of images. Exhibitions are held throughout the ancient walled city, indoors and outdoors, bringing photography to an audience in excess of 100,000 and transforming unlikely spaces such as disused factories, into galleries.

Mr. Zhang Guotian has been the Festival’s director since 2008 and during this time he has seen an explosion of interest in photography in China, a trend that is becoming universal regardless of cultural mores.

The Festival’s theme this year, “Life of Photography, World of Dream,” is open to interpretation with the loose definition being “how life is influenced by photography and how artists protect their dreams in photography when everything is changing around them. In Pingyao the audience will be exposed to about 20,000 images of different styles, from various cultures, with diverse topics and themes, taken either by professionals or amateurs. All these images are telling stories from different perspectives,” says Mr. Zhang.

The evolution of Pingyao Festival is a prime example of how the world of photography is shifting, and how the geographic bases are also changing; photographers from around the world attend this Festival, which has a solid place in the international photography festival calendar. Pingyao Festival has successfully created an environment for collaborative exchanges between different cultures using photography as a universal language, giving both professionals and amateurs a platform to celebrate the medium in all its forms.

“Pingyao Festival has given us the opportunity to build a bridge for the Chinese and international photography communities, and to break geographic constraints,” says Mr. Zhang. “Being the first photography festival in China, Pingyao has set models in many respects and today there are many festivals in different cities that all have their own flavour. The popularity of these festivals shows the prevalence of photography in China. Indeed, as cameras are getting cheaper, and cellphones are a necessity in life, photography has entered every corner of social life in China.”

Mr. Zhang says that Pingyao Festival has been witness to the vast changes that have occurred in photography over the past decade and that to define where interests now lie in terms of the subsets of photography – documentary, photojournalism, fine art – is harder than in the past.

“Photography is no longer what we knew it to be and in some ways it has experienced the greatest revolution in its history. I think these changes have left people feeling puzzled and confused about the different genres. There was a time when photography was regarded as pure art and detached from normal people; today however, almost everybody can take a photo. All of a sudden, we find that photography has been simplified, and the line between documentary, photojournalism, and art is being blurred. People tend to talk about the “image,” rather than “photography”; and they prefer using “languages in images” to “photography language”. Hence, it is hard to say if somebody is interested in a specific genre and I am seeing more photographers working with a comprehensive range of media and methods.”

The Masters
In its early years Pingyao focused on introducing its audience to the “masters” of photography showing works by the likes of Marc Riboud, Robert Frank, Josef Koudelka, Rene Burri, Sebastiao Salgado, Susan Meiselas, Martin Parr, Martine Franck and Eugene Richards. It also involved agencies like Magnum and Contact Press Images and organisations such as National Geographic and Aperture Foundation.

“Now that this elder master generation has become well-known in China, we are including the ‘new masters,’ and they are bringing in fresh blood to this community with their unique languages, techniques, and interpretations,” says Mr. Zhang. These “new masters” include “outstanding photographers like Ed Kashi, Thomas Kellner, and Cecilia Perades. But in my understanding, a lot of our invited guests are “masters” in some way”.

In programming the international component of the Festival Mr. Zhang says photography from dominant markets such as Europe and America is presented alongside emerging markets. “We are keen on bringing in photography from different parts of the world, such as Latin America, Asia, Oceania, and Africa, to present a more thorough picture of developments in photography across the globe”. Pingyao also celebrates Chinese photographers and in 2012 the Festival instituted the “salutatory exhibition” featuring works by Gu Di (2012) and Zhang Zudao (2013). This year the Festival will salute Yuan Yiping.

Photography education also plays a pivotal role at Pingyao and the Festival has this year invited 59 Universities from China and 17 international institutions. Under the education umbrella are symposiums and lectures by professors in various photographic disciplines.

“The Student Section of the Festival is considered the most dynamic as young artists represent the most creative group in art construction. This year’s program demonstrates both the diversity in photography education in China, and also in other countries and we are very proud to create this environment of exchange and learning.”

In conclusion Mr. Zhang says, “I think the function of a photography festival is to educate people about photography as a practice, as well as the larger world. At Pingyao we are helping to promote international communication”.