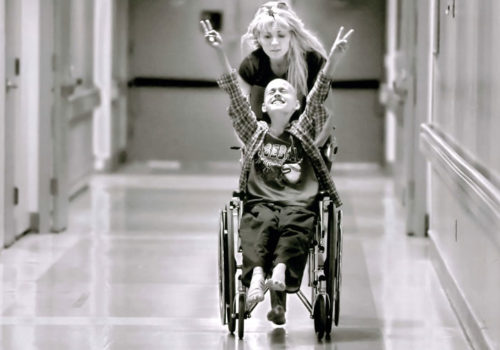 Resulting from exciting conversations during the Covid-19 crisis, the series seeks to understand “how the pandemic has affected the way social documentary photographers work”. This second episode explores the photographic practice of the American photojournalist Renée C. Byer, who won a Pulitzer Prize for her photo reportage A Mother’s Journey (2007).

Born in 1958 in Yonkers, New York, Renée C. Byer made her first steps in photography in the darkroom of her childhood apartment, in the Bronx. For her eighth birthday, her father gave her a Brownie Starmite II Kodak and about ten years later, she entered Ulster County Community College and then Bradley University (Peoria) to study art, social sciences and press communications.. After working on staff as a photographer and also photo editor for various newspapers, , she joined The Sacramento Bee as a photo reporter in 2003. Since then, she has been loyal to the local newspaper, publishing short reports, illustrating articles that are sometimes surprising,  to say the least, when you think about her known journalistic work, as she told National Geographic: “So shooting orchids in a beautiful greenhouse for a daily assignment is a luxury for me rather than traveling the globe to report on human tragedy of enormous proportions. I like the mix, frankly”.

Renée C. Byer is well-known for her long photojournalistic investigations. In 2007, Byer published the highly acclaimed A Mother’s Journey, which ultimately won the Pulitzer Prize for Feature Photography, recounting the tender relationship between Cyndie French and her eleven-year-old son Derek, who had a terminal brain tumor. From 2010 to 2014, Renée C. Byer wrote about and photographed the daily lives of the world’s poorest on four different continents all around the world, shooting both the extreme hardship of their everyday life as well as showing moments of joy. Published in 2014 under the title  Living on a Dollar a Day: The Lives and Faces of the World’s Poor, this award-winning book received, amongst other prizes, the International Photography Award that same year. Living on a Dollar a Day is now a touring exhibition and award-winning documentary film.

Byer’s work is underpinned by a deep empathy for her subjects and by her belief that photography can impact social change. Her approach sees her spending time with her subjects, getting to know them and allowing the story to emerge. “Whether the story is done in the U.S. or abroad, the most important thing is to let it unfold on its own. Time and access are the essence of compelling photojournalism. I have this innate curiosity that drives me beyond the obvious. For me it’s very important to go behind the scenes and into their home to find pieces of daily life that everyone can relate to” she says.

The Selects Gallery : Robert Farber : Women as Art : 50 Years of an Evolving Vision