Photographs of Robert Mapplethorpe and Sam Wagstaff one Afternoon in Arles 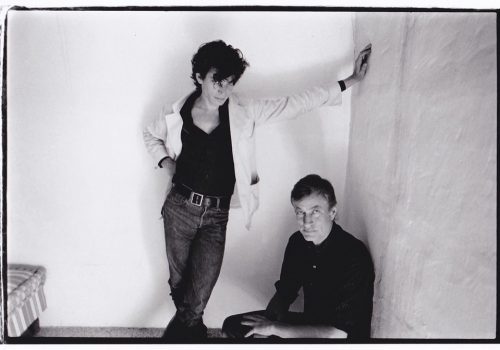 In July of 1981, American photo-printer Teresa Engle was finishing up a year long darkroom internship with French photographer Lucien Clergue in Arles, France. Robert Mapplethorpe was presenting his work in a large-scale exhibition as part of the annual Rencontres d’Arles photography festival and was visiting for the opening events. Early in the week, Teresa was briefly introduced to Robert at Lucien’s studio and saw him once again at the Place du Forum having lunch. Fans attempting to speak to him, obtain an autograph and asking for his advice on their careers surrounded Robert. Teresa recalls a moment when he looked up, caught her eye with a look of frustration and a slight smile.

On that cue, she walked over to Robert’s table and announced that it was time for his meeting with Lucien and escorted him out of the crowd. They walked up a nearby hill that led to Teresa’s street level apartment where they talked, drank coffee and smoked cigarettes. Robert Mapplethorpe was inquisitive about Teresa’s work as a photographer and printer and he agreed to be photographed by her later in the week.

On the last day of the festival there was a gathering at Lucien’s home attended by Robert and Sam Wagstaff. Robert spotted Teresa in the crowd and motioned to her that it was time to take pictures. They began an escape up to the empty third floor apartment when Sam decided to follow. The photo session lasted less than an hour and Teresa exposed only the two rolls of film that are finally exhibited today at Daniel Cooney Fine Art, in New York. On display are a suite of five never before exhibited photographs and two contact sheets. While some of these photographs have been reproduced and included in charity auctions they have never been exhibited together.